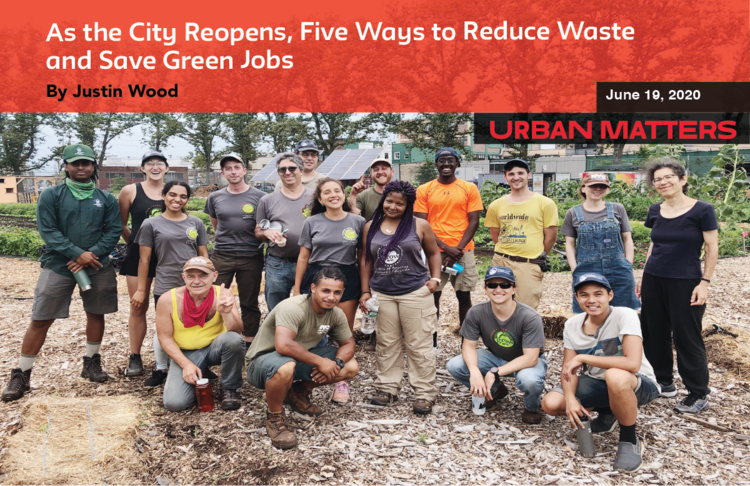 Director of Organizing and Strategic Research Justin Wood published an article in for The Center for New York City Affairs on five near-term, practical steps our local legislators can take to advance sustainability and job creation in our waste system.

As New York City faces cascading threats from a deadly respiratory virus, mass unemployment, climate change, and police brutality – all of which are particularly devastating to low-income communities and communities of color – we need to double down on “zero waste” policies rather than abandoning them in the name of austerity.

Reducing the millions of tons of solid waste we send to landfills and incinerators annually is critical to reducing air pollution in Black and Latinx communities most vulnerable to Covid-19, curbing the substantial greenhouse gas emissions caused by waste disposal, and sustaining and creating thousands of good, local green jobs in operations like composting and processing recyclables.

This summer, local legislators face a series of critical policy choices that will set our course toward a sustainable and equitable solid waste system and avoid a damaging backslide into the highly polluting disposal system of the past. While we indeed face a dire economic outlook, Communities United for Police Reform and the Movement for Black Lives remind us daily that “zero waste” initiatives, social services, and other vital programs can be saved and funded through modest reductions in the police department’s enormous $6 billion budget. With that in mind, here are five near-term, practical steps our local legislators can take to advance sustainability and job creation in our waste system:

1.) Save New York City’s compost and textile recycling drop-off sites. The City’s short-sighted decision to defund community compost drop-offs at greenmarkets and subway stations has already cost more than 90 people their jobs, and threatens to reverse the newly ingrained habits of saving and recycling food scraps many New Yorkers have developed. The City Council can restore this successful program with a modest $7 million restoration in the budget. For context, a mere 5% reduction in overtime spending at the NYPD would pay for this program four times over.

2.) Pass the CORE Act. The CORE (“Community Organics and Recycling Empowerment”) Act recently introduced by Council Members Antonio Reynoso and Keith Powers received a public hearing on June 15. It would mandate that the City create at least food scraps and textile recycling sites in every community district, ensuring that all New Yorkers can safely and conveniently recycle these materials near their homes. Locating these recycling centers throughout the city would help correct the unequal distribution of the now-suspended City Sanitation Department curbside compost program and previous compost and textile drop-off sites, which were not accessible to many communities of color.

3.) Legislate a timeframe for citywide organic waste recycling. Cities like Seattle and San Francisco have achieved high waste diversion rates by implementing citywide, mandatory compost collection, and recent data shows that at scale, food scrap recycling costs less than landfilling. The City Council should introduce legislation as soon as possible setting a timeline for New York City to similarly adopt citywide curbside compost collection, with a concordant reduction in garbage collections to help offset the cost – a program that Speaker (and mayoral candidate) Corey Johnson announced his support for in March.

4.) Expand Organic Waste Recycling for Businesses. Under a new City rule slated to go into effect in July, more restaurants, grocery stores, and other food waste generating businesses must source-separate and recycle food waste, and are encouraged to donate edible food to those in need. With the huge temporary decline in commercial activity and commercial waste volumes, now is actually an ideal time to implement new sustainable waste reduction and recycling practices at restaurants, stores, food manufacturers, and other businesses.

Facilities in and near the city that process organic waste now have extra capacity to do so, and the expanded commercial recycling rule will help ensure their economic viability and support local jobs. This new rule also provides a key opportunity for private waste companies to increase organic waste recycling capacity, expertise, customer routes, and customer service systems needed to actualize our fifth and final policy recommendation.

5.) Implement Commercial Waste Zones (Local Law 199 of 2019) as soon as feasible. Under this historic reform, notoriously inefficient private waste companies will be assigned to one or more of 20 geographic zones after going through a competitive contract award process designed to ensure that haulers meet high labor, environmental, safety, and customer service standards.

Because of the ongoing Covid shutdown, delays in this process have been inevitable and understandable. Drastic changes in the volume of waste generated by office buildings, restaurants, and other businesses have made it very difficult to estimate the number of customers and types of waste that will be generated in each commercial zone after the public health crisis and economy stabilize.

Ultimately, the administrative costs of the commercial waste zone system will be borne by a fee paid by waste haulers awarded contracts. However, it is also critical that the Sanitation Department receive an adequate budget to continue with implementation next fall and into 2021.

Sources: Office of the Comptroller, The City of New York Executive FY2021 Budget

As the City gradually reopens, it is more important than ever to send a clear message to the waste industry that investments in safe operating practices, recycling and composting infrastructure, and living wages and benefits for an essential and often exploited workforce will be rewarded through the CWZ system.

In the midst of an unprecedented public health and social crisis, cities are rethinking many outmoded assumptions about the allocation of public streets and sidewalks, commuting and remote work, and aggressive and costly police policies. A major push to establish food waste recycling as a convenient, safe, and accessible option for all residents and businesses is firmly within the City’s policy purview, and is a way we can take collective action every day on climate change, food insecurity, and creating good green jobs where we most urgently need them.

Justin Wood is director of organizing and strategic research at New York Lawyers for the Public Interest, which is part of Transform Don’t Trash NYC, a coalition of labor civic, and environmental groups that works for commercial waste collection reform.