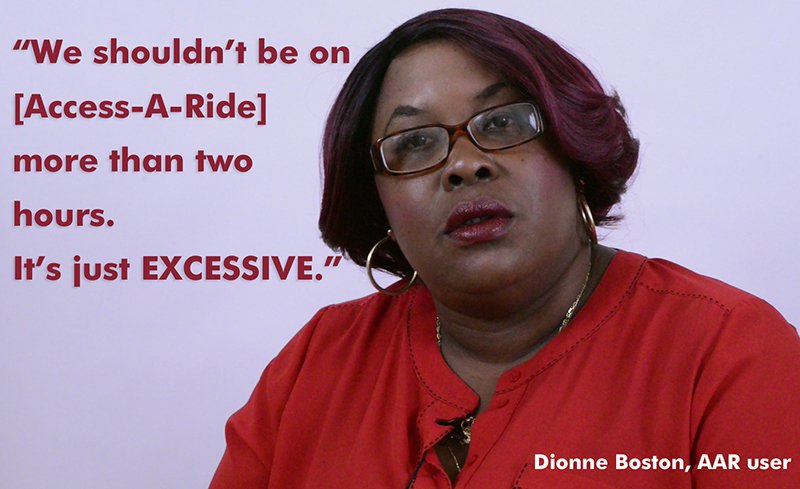 With the city’s subways still largely inaccessible for people in wheelchairs, the New York City Department of Transportation has today announced that it will allow vehicles with the City’s accessible van transportation system, Access-A-Ride, to ride in bus lanes—leading to more reliable service for more than 150,000 New Yorkers who currently use the service. Eman Rimawi, Access-A-Ride Campaign Coordinator here at NYLPI, was quoted in the DOT’s press release on the issue:

“Because the subway system is largely inaccessible, 150,000 New Yorkers with disabilities need to use Access-A-Ride to get around, and are constantly delayed by traffic congestion,” said Eman Rimawi, Access-A-Ride Campaign Coordinator, New York Lawyers for the Public Interest. “Allowing these public transit vehicles to use bus lanes is a vital step toward making paratransit more efficient and giving people with disabilities equal access to this important public infrastructure. Thank you to Mayor De Blasio and Commissioner Trottenberg for making this change.”

NYLPI is part of the Access-A-Ride-Reform-Group (AARRG!), and together we recently stopped a planned fare increase on the Access-A-Ride service, and also successfully prevented mooted rationing of a new “on-demand” version of the service for people with disabilities.

NYLPI Director of Strategic Research and Organizing Justin Wood was quoted in a City Limits story about the news:

“It’s definitely a step in the right direction,” Justin Wood, Director of Organizing and Strategic Research at New York Lawyers for the Public Interest, says of the rule change, which his group and others have been pushing for for more than a year. “To us, it was a very common sense thing that I just don’t think people had paid attention to before.”

With New York City subways largely inaccessible, Access-A-Ride, is a lifeline for many people with disabilities. It often is the only way people with disabilities get to their jobs, the grocery, medical appointments, or to see family and friends. But riders report a pattern of abysmal service, punitive application procedures, and unfair treatment by the Metropolitan Transportation Authority. Individuals tell harrowing stories of hours-long rides, lost jobs, and missed appointments.

You can read the full release from the DOT, announcing the news, here.

The whole City Limits story is as follows:

In Win for Disabled Commuters, City Will Allow Access-a-Ride Vans to Use Bus Lanes
By Jeanmarie Evelly

Access-a-Ride (AAR) customers, who’ve complained for years of unreliable and slow service, scored a win this week when the Department of Transportation approved a plan to let certain AAR vehicles use the city’s bus lanes – something users and advocates say will speed up trips under the MTA program, which transports riders who have disabilities that prevent them from taking other forms of public transit.

Starting May 30, wheelchair-accessible AAR vans with four or more passengers will able to utilize dedicated bus lanes, allowing them to travel at slightly faster speeds. A report from the Comptroller’s office last year found that the average Select Bus Service route, which uses such bus lanes, travels at almost 9 miles per hour, compared to local buses that average 7.4 miles an hour.

Users and advocates say the rule change will offer some relief to AAR customers, who’ve complained for years of long, meandering rides to reach their destinations. Since most AAR trips are shared, users are often forced to go on detours to pick up and drop off other customers, sometimes resulting in traffic-snarled trips that last hours, several riders told City Limits last year.

“It’s definitely a step in the right direction,” Justin Wood, Director of Organizing and Strategic Research at New York Lawyers for the Public Interest, says of the rule change, which his group and others have been pushing for for more than a year. “To us, it was a very common sense thing that I just don’t think people had paid attention to before.”

More than 150,000 New Yorkers use AAR, according to the city, which is home to more than 120 miles of bus lanes. The rule change comes as the city is making other efforts to speed up sluggish bus service: Mayor Bill de Blasio pledged earlier this year to launch an NYPD tow truck unit to haul away cars blocking dedicated lanes, and DOT is making design changes to two dozen streets with the goal of quicker bus travel there, according to an announcement last month.

The new rule change applies only to AAR-branded vans with four or more passengers, but accessibility advocates hope to see it amended to allow other types of AAR vehicles to travel in bus lanes, including smaller sedans. The MTA is also now using more taxis and for-hire vehicles to transport AAR users, so advocates would like to see those eventually included as well.

“We understand the concern of not wanting to have the taxi industry abusing this,” Wood says, but adds that as technology improves, it will be easier for the city to identify which vehicles are part of AAR, making enforcement easier.

“Our primary goal is for people with disabilities to be treated equally when they’re using public transit,” Wood says, calling AAR a “hugely dysfunctional system with lots of delays and lack of reliability.”

“Any steps that help ease the traffic congestion part of the delays will help both the users and the drivers,” he says.