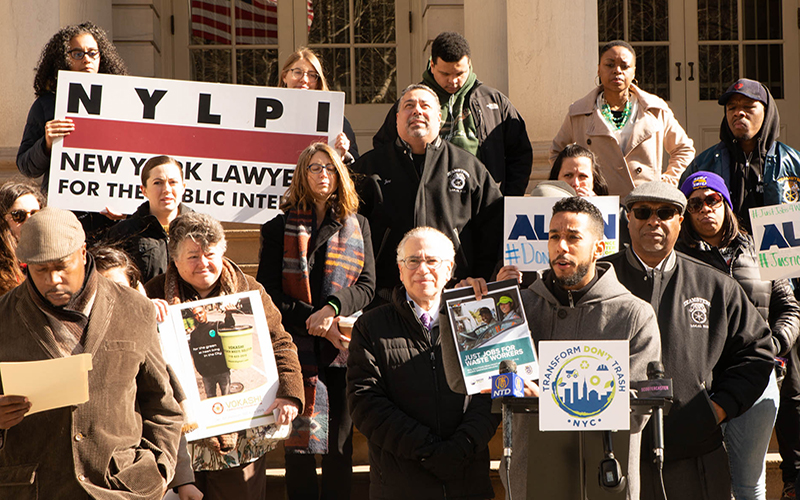 The Transform Don’t Trash NYC Coalition, of which NYLPI is a member, launched in 2013, calling on the city to adopt commercial waste zones and address the rampant abuses of the private carting industry.

You can also read the editorial at the Crain’s website.

One thing the de Blasio administration has accomplished with its years-in-the-making plan to radically change the way private carters collect commercial waste is that it has sparked a wide-ranging debate on that most basic of government functions: picking up the garbage.

Encompassing wages, working conditions, pedestrian safety, climate change and other complex issues, the debate has helped underscore just how vital the too-often-overlooked sanitation sector is to the city’s health.

Even better, the debate led to a compromise. After months of wrangling, an updated bill is set to be introduced soon in the City Council.

Like the original proposal in May, the new plan would divide the city into 20 zones served by carters who survive a bidding process that considers safety records and sustainability practices alongside pricing. The main sticking point had been whether to make each zone the exclusive province of a single carter, as the initial council bill stipulated, or allow up to five operators to compete for customers within each zone. The Sanitation Department—and many business interests—advocated for that. The compromise ultimately allows for three.

Coming to those terms is a testament to the negotiating skills of the bill’s author, Brooklyn Councilman Antonio Reynoso, the sanitation committee chairman. The agreement broke the logjam between his environmental- justice allies, who considered exclusive zones critical to reducing pollution, and Sanitation Commissioner Kathryn Garcia, who was determined to prevent monopolies.

Although the deal’s rare example of political concessions is encouraging, the limit of three carters per zone does seem arbitrary, particularly for the center of Manhattan. If the compromise is an acknowledgment that choice matters, why not provide more choices in neighborhoods with the most businesses?

More spots for carters would help allay concerns over industry consolidation and ensure that buildings and businesses continue to have a robust group of operators to choose from. In her remarks at last week’s Crain’s forum, Garcia said she was prepared to do an “emergency procurement” to expand the pool if the number of providers threatened to fall below three per zone. But why wait for an emergency?

In any case, there are a lot of good things in the plan. The control the city will gain over what has been a Wild West landscape will not just produce more efficient routes and safer streets but also should spur higher rates of recycling. Just as welcome would be an expected improvement in transparency over the destination of food waste, as the city expands its commercial organics recycling program.

Moreover, the bill shows that fighting climate change and improving air quality are essential aspects of taking out the garbage. We encourage the council to pass the measure.