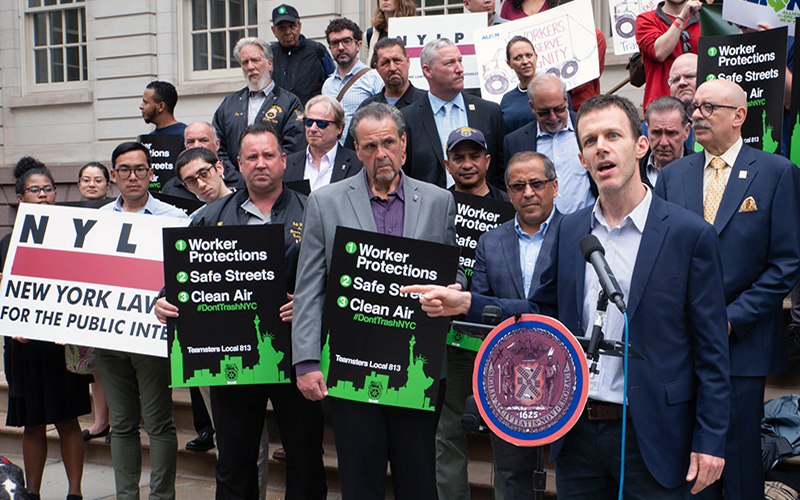 NYLPI’s Director of Strategic Organizing and Research Justin Wood (pictured, speaking at a rally for regulation to improve the industry) was quoted in a Daily News story by reporter Thomas Tracy, this weekend, focusing on dangerous conditions in the private sanitation industry.

By THOMAS TRACY
| NEW YORK DAILY NEWS |
JUL 07, 2019 | 7:00 AM
Only about 15% of private sanitation companies licensed to pick up commercial refuse in New York City have installed life-saving side guards on their trucks, even though the city has agreed to help with the cost, the Daily News has learned.
Documents provided to The News show roughly 900 of the city’s 6,000 private commercial fleet have installed guards that are affixed to rigs between the front and rear wheels to prevent cyclists or pedestrians from falling beneath a truck and getting run over. The information was acquired by a Freedom of Information Law request of city records by the group Transform Don’t Trash NYC.
According to city law passed in 2015, all commercial waste companies operating in the city must have the side guards on trucks weighing 10,000 pounds or more by 2024 — or face violations and fines of $10,000 per truck.
Transportation advocates believe side guards could have saved Mouctar Diallo, a private waste hauler who fell off the side of his Sanitation Salvage truck and was crushed Nov. 7, 2017, nearly two years after the city law was passed.
The driver, Sean Spence, denied even knowing Diallo during questioning by police, claiming his helper was a panhandler who approached his truck “looking for a handout.”
Sanitation Salvage has since shut down. While residential refuse pickup is handled by the city Sanitation Department, waste from stores and businesses is picked up by private haulers. And because private haulers have contracts with individual businesses, they run roughshod across the five boroughs, critics claim.
Now, the City Council is poised to vote on a bill that’ll scrap the current commercial waste pickup plan for a “zone plan” where one private carter will be responsible for removing all commercial waste in a given neighborhood. Citing the most recent figures available, the city’s Business Integrity Commission, which monitors private waste haulers in the city, said more than 1,000 commercial garbage trucks have side guards installed.
The BIC and the Department of Transportation have created a rebate program to help sanitation companies pay for them — and so far, nearly 40 companies have participated and 170 guards have been installed with the city’s assistance. Side guards can cost between $600 to $2,500 to install.
“The death of Mouctar Diallo was a tragedy, and BIC encourages all companies to install side guards to protect their workers and the public,” BIC spokeswoman Laura Feyer said. “Thanks to Local Law 56 of 2015, mandatory side guards for trucks over 10,000 pounds will go into effect in 2024, and we look forward to its implementation.”
But advocates were stunned waste haulers didn’t install side guards on their trucks after Diallo’s death.
“Despite years of industry rhetoric about improving safety, it is obvious that subsidies and incentives won’t change the behavior of low-road private waste companies,” said Justin Wood of New York Lawyer’s for the Public Interest. “We need a commercial waste zone system that selects only safe and responsible haulers, and holds them accountable to higher standards through strong, enforceable contracts with the city.”
According to city data, some private carters have equipped a third or half of their fleet with side guards, while others haven’t done anything. A spokesman for Action Carting, the city’s largest commercial waste hauler, said Sunday that all of their trucks are equipped with side guards. Calls for comment to some of the other private haulers on the city’s list were not immediately returned. Kendall Christiansen, executive director of New Yorkers for Responsible Waste Management, which represents a group of private haulers that operate in the city, said the BIC numbers can be deceiving since not all of the vehicles monitored by the city agency are responsible for commercial refuse pick up.
“(Many are) registered to construction and demolition debris removal companies, landscapers and a mix of grease haulers and medical waste collectors,” Christiansen said. “The deadline is still a few years away but it is entirely safe to assume that the majority of the fleets operated by the top 30 companies have side guards, both installed on new trucks and retrofitted on existing ones.”
Christiansen said many private companies have made additional safety improvements beside side guards, such as installing on-board cameras that will help with driver monitoring and training for future drivers.