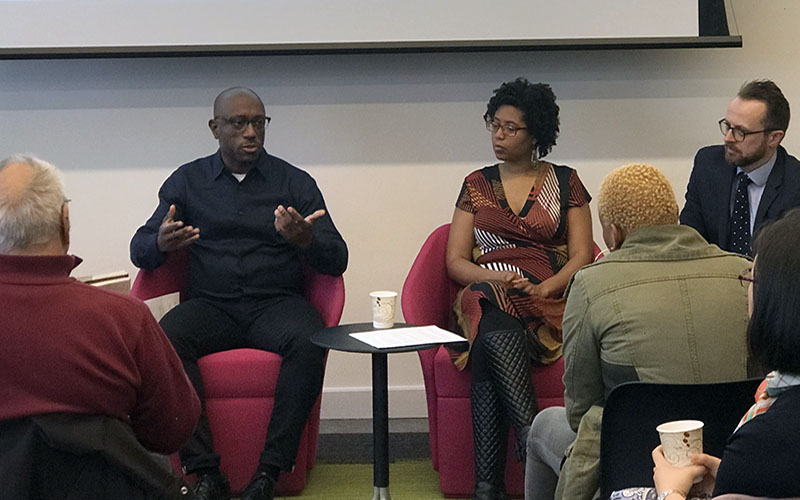 More than 80 nonprofit founders learned about the basics of nonprofit marketing and communications today at the last of five panels in our “Nonprofit Formation Fundamentals” bootcamp series, which we’ve run throughout April in partnership with Candid. (formerly the Foundation Center and Guidestar), and Support Center.

Today’s session featured storytelling experts (from left to right in the picture, above) Michael Crawford, Culture Director at MoveOn.org, Nicole McGarrell, Founder of Sunny Day Marketing, and Matt Davis, Communications Director with NYLPI. It was chaired by Lakimja Mattocks with Support Center (not pictured).

Michael introduced himself by showing this video, which he produced in 2014 when he was Director, Digital and Creative for Freedom To Marry. It features two Southern women from Alabama who, at the time, were unable to marry in their home state.

Michael talked about how the organization honed in on a Southern audience as part of its movement to galvanize support for marriage equality across the U.S., and how his team picked the couple. He said it’s important for nonprofits to focus on storytelling to a specific audience, based on what they need to win, and he said nonprofits should not be afraid to “speak from the heart” or, indeed, to produce content that isn’t overcomplicated, but which engages an audience on an emotional level.

“We all want to change the world,” he said. “But it doesn’t always have to be super serious. What you want to do is emotionally connect with people and get them to understand a shared goal. Think about what you want people to know and feel.”

The Freedom To Marry website now contains lots of details about how the campaign came together, including around communications, he said.

Nicole talked about the importance of planning around your communications.

“When you have a plan you are not guessing,” she said. “You’re not just throwing spaghetti at the wall and seeing what sticks. What are your goals? Who are you trying to engage? What are your measures of success?”

Matt said it’s remarkable how little time nonprofits spend on marketing and communications, particularly early on, when it’s so crucial to building an audience and also to fundraising.

“But most people stop reading your website after 110 words,” he said. “So, if you do anything about marketing and communications as you’re starting out, it’s probably a good idea to figure out what your 110 words need to be. How are you going to get people to pay attention?”

The panelists talked a lot about nonprofits needing to think more like brands, and to build emotional engagement with their audiences. Very few people feel about nonprofits the way they do about Nike shoes or Apple phones, they said, which is remarkable, given that nonprofits really are trying to change the world.

The audience asked questions about how to measure the success of communications strategies, and how to prioritize audiences. There was discussion of polling numbers, email open rates, and fundraising metrics. The panel also discussed how to develop marketing materials.

“Not everything in your head needs to be on the paper,” said Nicole. “But think about what can people read in ten to 15 seconds. What would you want them to know? And don’t be afraid to plant your flag in the ground and let your point of view be known.”

Fundamentally, the discussion came down to spending some intentional time in creating a communications plan, no matter how bare bones, and even without spending money on consultants to help you craft it.

Previous sessions in the bootcamp series have touched on legal, financial, governance and board development considerations, as well as fundraising essentials for nonprofits. If you’re interested in starting a nonprofit but would like some support, check out Candid. (formerly the Foundation Center and Guidestar), and Support Center. Or click here to read more about NYLPI’s pro bono services for nonprofits.