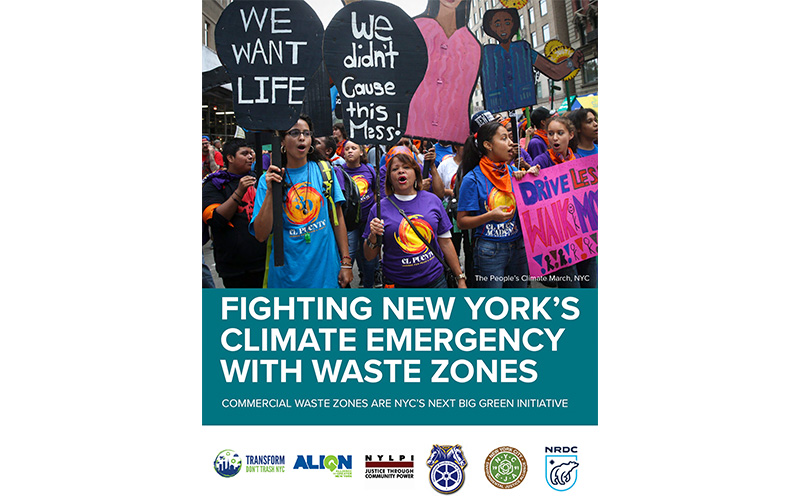 Transitioning New York City to an efficient, high-diversion commercial waste zone (CWZ) system will avoid up to 2 million tons of Greenhouse Gas emissions per year, making this one of the most important climate initiatives City lawmakers will decide on this year.

The statistic is just one of several striking findings on greenhouse gas reduction in a new report issued today by the Transform Don’t Trash NYC coalition, titled “Fighting New York’s Climate Emergency with Waste Zones.” (The full report is available by clicking here.)

Report author Justin Wood from New York Lawyers for the Public Interest said: “There can be no more debate and half-measures on climate change. The time to transform New York’s commercial waste system to sharply reduce both greenhouse gas emissions and local air pollution is now.  A strong commercial waste zone system will avoid up to 2 million tons of CO2, eliminate 37 diesel truck trips to the moon and back each year, and finally give our small businesses access to sustainable, affordable waste services while creating hundreds of good green jobs for New Yorkers.  We’re far behind other cities, where we should be leading.  Passing Intro 1574 will restore New York as a national leader on climate justice and sustainability.”

Crain’s New York Business covered the release of the report:

Both sides gear up for garbage fight

Supporters and opponents of a bill to overhaul commercial waste pickup are trying to seize the narrative ahead of a City Council hearing Thursday on the controversial plan.

Backers have come out today with a report positioning the bill, which would establish exclusive zones served by a single carter—as part of a growing wave of global-warming legislation. The report’s title leaves little to the imagination: “Fighting New York’s Climate Emergency with Waste Zones.”

“It seems local and state legislators have recognized that [the city and state level] is the place to take action,” said Justin Wood, research director at New York Lawyers for the Public Interest and the report’s author. The climate bill that just passed in Albany is providing “great momentum going into this debate.”

Opponents, meanwhile, sent a letter yesterday to Speaker Corey Johnson signed by half a dozen business groups, including the Bronx, Brooklyn and Queens chambers of commerce. It predicts the zone system will bring “chaos” and “devastation” that “would be impossible to correct once implemented.” And it asks the speaker to consider a bill backed by the hauling industry that would leave the open-market system in place.

The speaker, however, is one of the sponsors of the zone bill.

That bill, sponsored by Sanitation Committee Chairman Antonio Reynoso, would divide the city into at least 20 zones, each served by one principal commercial hauler. The report argues that exclusive zones could result in a reduction of 2 million tons of greenhouse gas emissions. It counts both the effects of less trucking and the higher rates of organics recycling that advocates say can only be achieved through exclusive zones.

Kendall Christiansen, executive director of New Yorkers for Responsible Waste Management—a trade group formed to fight zone collection—argues that the numbers have no basis in reality.

He does believe significant improvements are feasible, however, within the open-market system and without the years-long implementation envisioned in Reynoso’s bill. Carting companies have long complained that reformers don’t compare zone-collection projections with what other potential regulatory measures could achieve.

The bill may have the support of the speaker, but it is not backed by the Department of Sanitation, which had been pushing a plan in which three to five haulers would be assigned to each zone. The proposal for multi-hauler zones was intended as a compromise but was met by objections from both sides—environmentalists and workers’ rights groups on one hand and real estate interests and carters on the other.

The report cites the city’s Draft Generic Environmental Impact Statement for the plan and estimates that this efficiency would save $23 million in annual operational costs, compared to an open-market “No Action” scenario — enabling haulers to provide better waste diversion services while avoiding major increases in customer costs.

The City Council Sanitation Committee will hold a hearing on the Commercial Waste Zone bill on June 27th.

Council Member Reynoso said: “New York City has a long way to go towards reaching its sustainability and environmental goals. To start, we need to significantly reduce greenhouse gas emissions. Currently, the private sanitation industry is a major contributor to our City’s emissions. A zoned collection system would make routes drastically more efficient, helping to cut down on vehicle miles traveled and pollutants. According to The Transform Don’t Trash Coalition’s recently released report, a commercial waste zone system would lead to a reduction of emissions equivalent to removing one in five cars off NYC Streets. I thank the Coalition for highlighting the radical environmental improvements that would be brought about by a CWZ system and look forward to implementing this system in NYC.”

Council Member Costa Constantinides, Chair of the Committee on Environmental Protection, said: “New York City must tackle greenhouse gas emissions from every sector to preserve its future. By creating commercial waste zones, we may be able to save as much as 2 million tons of greenhouse gases emitted annually, along with enhance our air quality and create a safer environment for our trash haulers. I am proud to support my colleague and friend, Sanitation Chair Antonio Reynoso, in moving this necessary legislation forward.”

Eric A. Goldstein, NYC Environment Director at the Natural Resources Defense Council, said: “The current system for commercial waste handling is an overlooked contributor to global warming.  Roughly 1,100 diesel-powered trucks racing along city streets, spewing pollutants into the air and mixing food waste with trash headed for shipment to landfills where the organics are a major source of planet-cooking methane emissions.  An exclusive zone system, as this report shows, can slash these airborne emissions and transform the city’s commercial waste collection system from a renegade source of global warming pollution to a national model of sustainability and equity.”

Tok Oyewole, Ph.D., Policy & Communications Organizer, NYC-EJA, said: “The climate and environmental impacts of excessive waste generation and poor waste separation – of sending what can be reused to landfill in diesel-polluting, carbon-consuming trucks – are very high, particularly in environmental justice and frontline communities. New York City’s commercial waste collection system did not originate with the health of people or the planet at the forefront, so we must follow the lead of other major cities and implement a more efficient exclusive zoned system to reduce vehicle miles travelled, while strongly prioritizing zero waste goals and just employment opportunities.”

George Miranda, President of Teamsters Joint Council 16 said: “New York City is not going to meet our climate change goals if we don’t tackle the sanitation system. We passed congestion pricing and we passed building emissions cuts. An exclusive commercial waste zone system is the next logical step in our just transition to a low-emission and fair economy for all workers.”

Maritza Silva-Farrell, Executive Director of ALIGN said: “New York City’s private commercial waste system is broken. It has a lot of problems, from environmental injustice to unsafe, low-pay jobs. Intro 1574 will ensure good jobs for workers and a safer environment for all New Yorkers. By assigning a single hauler to each zone, this plan will move our city forward on meeting our climate commitments with a just transition to a low emission economy where workers, neighborhoods, and low-income communities of color matter. We need to make this legislation a reality, so that our city can have a commercial sanitation system that we can be proud of, from collection to disposal.”

Reform of Rogue Sanitation Companies Will Save Lives — And the Planet

Can the garbage industry get clean?

A City Council proposal to reform the notorious private carting industry will not only make the roads safer, but will be the ecological equivalent of removing one-fifth of the city’s greenhouse-gas-spewing cars — but the de Blasio administration doesn’t support the measure.

A new report to be issued today by the Transform Don’t Trash NYC coalition bolsters Brooklyn Council Member Antonio Reynoso’s call to create exclusive zones where only a single trash company could operate and put an end to the current free-for-all of up to 50 private carters picking up trash in each neighborhood. Exclusive zones, Reynoso says, would eliminate the incentive for the rogue companies to race through the streets from dusk to dawn, but also cut the number of trucks on the streets — reducing 18 million diesel truck miles a year, which is the equivalent of 37 trips to the moon and back.

“There can be no more debate and half-measures on climate change. The time to transform New York’s commercial waste system to sharply reduce both greenhouse gas emissions and local air pollution is now,” said Justin Wood from New York Lawyers for the Public Interest, who co-authored the report, Fighting New York’s Climate Emergency with Waste Zones. “We’re far behind other cities, where we should be leading.”

Reynoso unveiled legislation last month in hopes of reforming an industry that has killed at least 21 people since 2016, with the latest fatality coming last month when a Boro Wide Recycling truck driver backed up a one-way street in Jamaica, striking and killing a motorcycle rider. 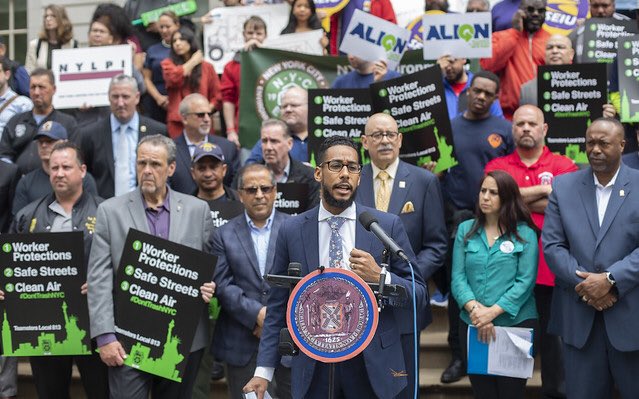 The de Blasio administration balks at Reynoso’s call for “no less 20 zones” exclusive zones, preferring permitting three to five haulers to 20 zones across the city. Transitioning to exclusive waste zones holds the promise of reducing crashes, but it would also drastically cut back on the amount of greenhouse gasses the thousands of big rigs emit into the air by creating recycling and composting requirements through financial incentives as part of the legislation.

Commercial waste hauling is not often thought about when officials tackle global warming — but there are roughly 1,100 diesel-powered garbage trucks on the city’s streets every night. Worse, says Eric Goldstein of the Natural Resources Defense Council, the industry isn’t doing enough about all the food waste that gets mixed in with the garbage, releasing “planet-cooking methane” as it decays.

“An exclusive zone system, as this report shows, can slash these airborne emissions and transform the city’s commercial waste collection system from a renegade source of global warming pollution to a national model of sustainability and equity,” he said.

The Council will take up the legislation on June 27.