“It’s not hard to find an example of a city that’s doing accessible transportation better than New York.”

“It’s not hard to find an example of a city that’s doing accessible transportation better than New York.” 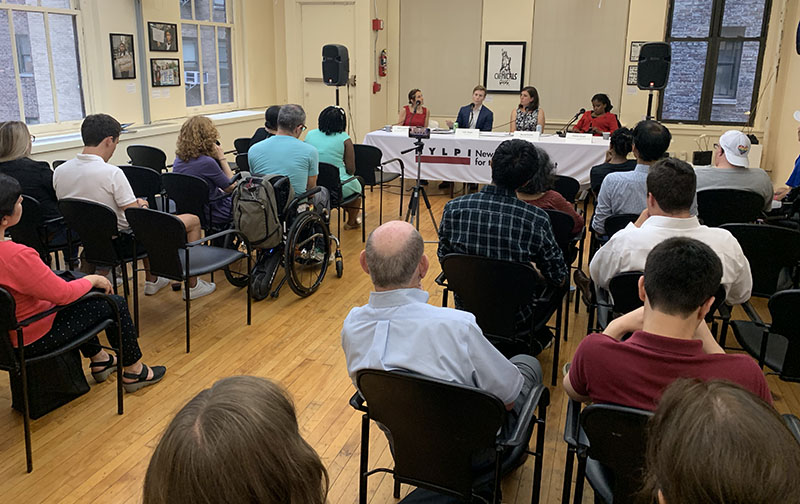 Disability Justice advocates from around New York focused on how to make the city prioritize accessible transit tonight, at a packed-room panel discussion at “All Access”, NYLPI’s pop-up social justice museum. 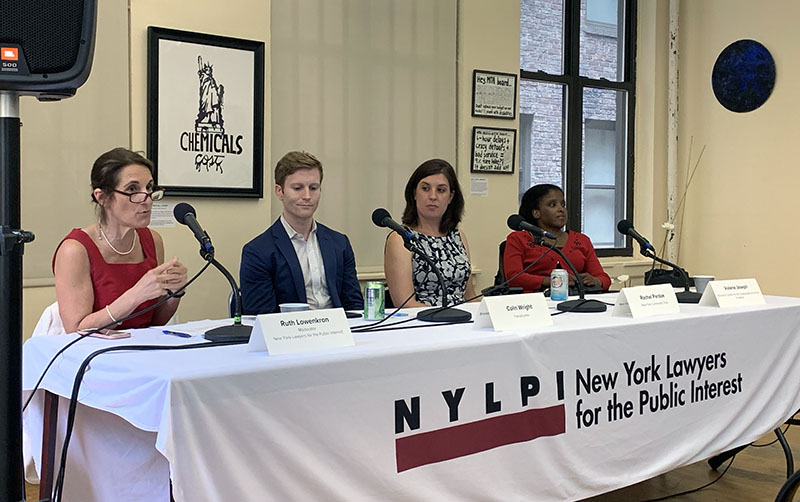 NYLPI Director of Disability Justice Ruth Lowenkron (left, in the picture, above), moderated the discussion, featuring panelists (from left to right) Colin Wright, Rachel Pardoe, a program officer with New York Community Trust, which funds the Access-A-Ride-Reform-Group (AARRG!), of which NYLPI is a part, and Valerie Joseph, with Brooklyn Center for the Independence of the Disabled, which is also a member of AARRG!

New York has been through plenty of lawsuits related to accessibility, but it’s important that the city is held accountable for its commitments in legal settlements, the panel agreed.

“We have to make sure that they said that they do what they said they’re going to do,” Valerie said. “Many of us in this room I’ve seen in court with me. We’re fighting, and the judges are with us.”

The panel highlighted limitations for people with disabilities, particularly around New York’s taxi service, its Access-a-Ride service, and limited subway access. They also focused on breaking down the barriers to making the right kind of change.

“A lot of the excuses that are being made are around money, I think that accessibility and disability is not really a priority for a lot of city agencies,” said Rachel. “When it comes to money, I think a lot of it is holding the city to the law, and make sure that they’re actually implementing ADA and other human rights laws.”

The cities that are making the most progress on accessibility around the country are prioritizing it and showing leadership, the panel agreed. For example, Chicago has a detailed strategic plan to reach 100% accessibility, which helps them go to the state legislature to ask for money. Boston, in 2006, settled a lawsuit with a very detailed plan, and its elevator reliability is nearly 100%.

Likewise, many of New York’s government agencies aren’t as transparent as they could be, the panel said, and working to ensure that voices like those in the AARRG coalition are heard is an important part of pushing for accessibility.

The panel focused on the need to secure more money from Albany, the state capitol, as well as from the city. And of course, they agreed, foundations can push this agenda a great deal.

“Go to their offices,” Valerie said. “Tell them about organizations that need their assistance. That’s where the money comes from.”

“Foundations who work to improve the social good need to consider accessibility as an integral part of that,” Colin said. “Foundations could do a better job of supporting grassroots advocacy in general, and around accessible transportation in particular. I think one of the most exciting grassroots organizers is Rise and Resist, the elevator action group, who has never asked us for money, actually. And I think that supporting groups like that, I’d love to be able to support that here, and in other cities as well.”

“There are so many foundations who are putting out equity statements,” Rachel said. “They’re not necessarily thinking about disability as part of that, and they need to be creative.”

The panel also highlighted the opportunity cost, for New York, in failing to ensure that people with disabilities are able to effectively travel to jobs.“One of the main reasons for low numbers of people with disabilities who are employed is because of the lack of accessibility,” said Ruth. “It’s important to just say it, flat out, like that. This is a huge opportunity for the city.”

Audience questions focused on how to improve the Metropolitan Transportation Authority’s accountability to people with disabilities, how to organize around disability exemptions for the upcoming congestion charge, and another audience member also asked for a focus to occur on the cost of Access-a-Ride, in comparison to the four billion dollars it would cost to make all of the city’s subway stations accessible.

“Access-a-Ride costs $700million a year. Six years of that gets you to four billion dollars, and we have all the stations accessible,” said the audience member.

Another audience member asked whether it’s appropriate for the MTA to prioritize art in the subway stations before it makes sure they’re all accessible.

You can watch full video of the panel discussion on our Facebook page.