“I’ve met fantastic people because I have Parkinson’s. It’s a weird blessing…”

“I’ve met fantastic people because I have Parkinson’s. It’s a weird blessing…” 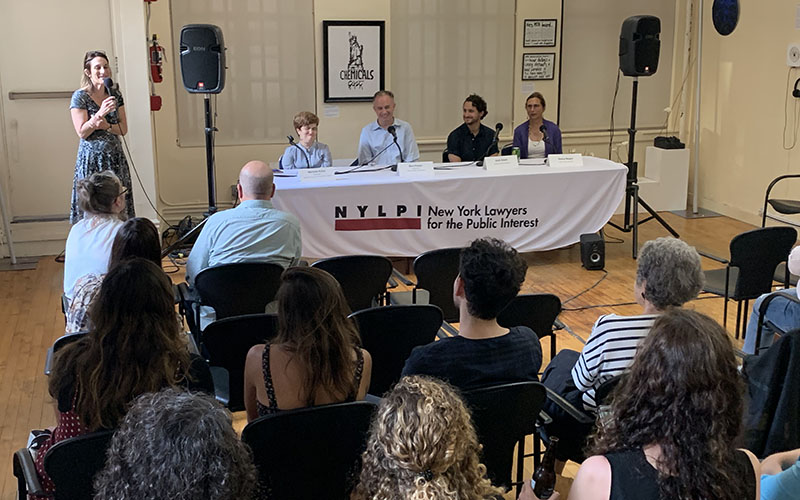 More than 60 people attended a screening at NYLPI’s All Access pop-up museum, of Zack Grant’s documentary film, Shake With Me, about artist and commercial designer Debra Magid, the director’s mother, and her diagnosis with Parkinson’s Disease.

The film began as a continuing education project for the director, which blossomed into an exploration of his family’s emotional reaction to his mother’s diagnosis.

Both of Zack’s siblings found that the documentary process was a way to “release those anxieties” that came with the diagnosis, he said.

“We were very secretive about the diagnosis, and my sister and I didn’t even know for the first year, I think the film gave everybody an excuse to put their feelings on the table,” he said.

Debra said the project has, in fact, been a remarkable evolution for her, as a work of art.

The panelists discussed the “creative burst” that Magid went through following her diagnosis. It’s a “ticking clock”, she said, getting the diagnosis, and so it has led to more bravery to pursue creative projects without caring what people think.

Moderator Bret Parker, a lawyer with the New York City Bar Association and co-chair of the Michael J. Fox Foundation Patient Council, asked what it was like to take something so secretive, and make it so public.

“When we started, I thought this was going to be a school project,” Debra said. “It’s been a very slow process of walking out of the closet. Initially the first response was, I’m not telling anyone, I told a few close friends, my brother, that’s it, because I didn’t want people to see me through the Parkinson’s filter. I just wanted to be who I was. And then I started telling people. When you tell a good friend you have Parkinson’s, they cry, and then you have to console them, and tell them you’re not going to die, and it’s just excruciating to go through that process. When Zack did a screening downtown it really hit me that this was in the real world, now, and not just this intimate project. I just flipped, because I looked up on the screen and my head was 15 feet tall, and I said I don’t think I can do this.”

“The ship had sailed, by then,” said Zack.

And then there was telling people who she worked with, and an interview broadcast on the news.

Michelle Kraus, a senior social worker at NYLPI, and the other moderator of the discussion, asked what it was like to slowly see oneself as part of the community of people with Parkinson’s.

“I know people who’ve gone downhill in 18 months, horribly, and I’ve known people who have had it for 18 years and are still basically okay,” Debra said. “But that’s what’s so important about seeing yourself as part of this community. I knew about classes and programs, but I didn’t have the confidence to go there. It came with time. And I’ve met fantastic people because I have Parkinson’s. It’s a weird blessing.”

As the disease progresses, Magid will work to figure out how to continue with her visual expression, she said.

“As I lose control over my body, I become more and more interested in abstract expression,” she said, “and my brain knows exactly what it’s doing.”

There are two more events this month as part of our museum series, a panel about immigration detention, and another about how to make the city more sustainable through passing new laws. Find out more and sign up on our event page.