“Most individuals I’ve spoken to tell me that they’re treated like animals.”

“Most individuals I’ve spoken to tell me that they’re treated like animals.” 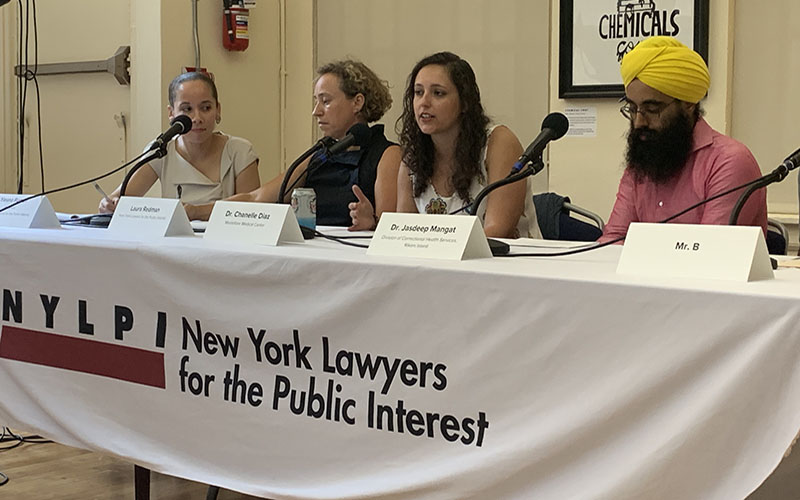 Dozens of New Yorkers attended a panel discussion at All Access, our pop-up social justice museum, focused on healthcare in immigration detention, today. You can watch video of the event on our Facebook page.

NYLPI’s health justice attorney Yleana Roman (above, left), moderated the discussion, which featured (from left to right) Laura F. Redman, the Director of Health Justice at NYLPI, two members of our medical providers’ network, Dr. Chanelle Diaz, and Dr. Jasdeep Mangat, and a longtime resident of New York who spent three years in immigration detention recently, having been diagnosed with renal cancer and thoracic degenerative disease. He was released on bond in May this year.

“My experience in immigration detention was horrible,” said the man. “And it was very traumatizing for me. It’s still very traumatizing for people who are in there now.” It took months for the man to get surgery, he said, having complained about shooting pains for months, until he got an MRI. “Just sitting here is a lot of pain,” he said. “It’s very uncomfortable for me. I’m out now, so I’m trying to get the best medical care I can get.”

“There’s a complete lack of humanity that people are treated with,” said Dr. Diaz. “They’re failing to see people as human beings, and then not providing them with adequate care. Most individuals I’ve spoken to tell me that they’re treated like animals. And when that is the standard, you can imagine what’s going to happen to someone’s health. When a diagnosis is delayed because it takes days for someone to see a nurse, for example. Individuals in immigration detention are dehumanized—they’re not being treated with the same standards we’d apply to someone else, and so there’s a basic problem with human rights, here.”

“It’s just the health risk of being detained,” said Dr. Mangat. “From re-traumatization to seeing individuals who didn’t have depression or mental health problems before they came in, and who are developing it now. Individuals in jails have a set timeline, but with ICE, you don’t know your court date, and that has an effect, as well.”

Doctors in NYLPI’s medical providers network show up to see if the standard of care being given to individuals in immigration detention is adequate, Dr. Diaz said. They also help by writing letters based on the medical conditions of people in immigration detention, Laura said, which have got people released. For example, this happened as recently as last week.

“There’s a real power in doctors’ voices,” Laura said. “The work has built a really great space to have doctors really engage with a population that until recently, didn’t get much attention, and the voices of doctors in these situations are very powerful.”

The panel said the government is obliged, under the constitution, to provide adequate healthcare to people in detention. In addition, people in immigration detention need to be treated better than people in the prison population, Laura said.

“It’s wrong,” said the man who’d been detained. “It’s the government, and they’re supposed to give us proper medical care.”

“This is people from our communities being stolen from our streets, taken to these terrible places, and that’s not what we want for our society,” Laura said.

“This has been going on for more than the last few years that it’s become a National issue,” Dr. Mangat said. “It’s been going on before the Obama years, it’s been a pressing issue for a lot longer than it’s got a lot more media attention.”

The panel discussed ways for people to hold county jails accountable for their treatment of people in immigration detention, participating in campaigns, visiting people in detention. And if you’re a doctor or medical provider interested in joining our network to help people, please do get in touch.

“I also tell people in detention how important it is to advocate for yourself,” the man who’d been in immigration detention said. “The point is that you have to speak up and advocate. It’s very important. It’s very tough for me. That three years was very tough for me. That experience, I wouldn’t want anyone to go through that. I’d like everyone to come together and shine more light to help everyone in immigration detention all over the country. We’re not rapists, we’re not murderers, we’re not terrorists. We’re just here to take care of our families, and they pick us up and put us in detention like we’ve committed some kind of heinous crime.”

Q&A discussion focused on laws about medical care for people coming to this country from elsewhere, on inter-generational trauma for children in families with mixed immigration status, and on possible further routes to fight for justice in this area.

Update, Jul 31: The panel was featured in a story by Politico Pro:

ALBANY — While conditions at immigrant detention centers near the southern border have gained national attention in recent months, some advocates are concerned that facilities in New York and New Jersey face similar issues when it comes to providing adequate health care.

Laura Redman, director of the health justice program at New York Lawyers for the Public Interest, told POLITICO that her organization has noticed a pattern of poor health care access in county jails in that contract with the U.S. Immigration and Customs Enforcement.

The Department of Homeland Security’s inspector general issued a report last month calling for greater oversight of detention facilities, including the Essex County jail, after finding unsanitary and “egregious” conditions there.

Redman, who led a Tuesday night panel discussion on the issue, said that while the lawyers’ group saw similar issues under the Obama administration, the problems have gotten worse amid the Trump administration’s crackdown on immigration.

“The more you shove more people into smaller spaces, the greater increase is seen in these concerns, and that can result in really dramatic health consequences, including death,” she said in an interview. She noted that NYLPI began looking at health care in the local detention centers in 2015.

Redman said her organization hopes the panel discussion and a related pop-up art exhibit not only call attention to the issues, but encourage more people — particularly those in the medical community — to act.

“We’re trying to keep our work very community-based and not only see the connection with the medical community as a way to advocate for individuals, but also for medical providers to use their voice to seek greater systemic change,” she said.