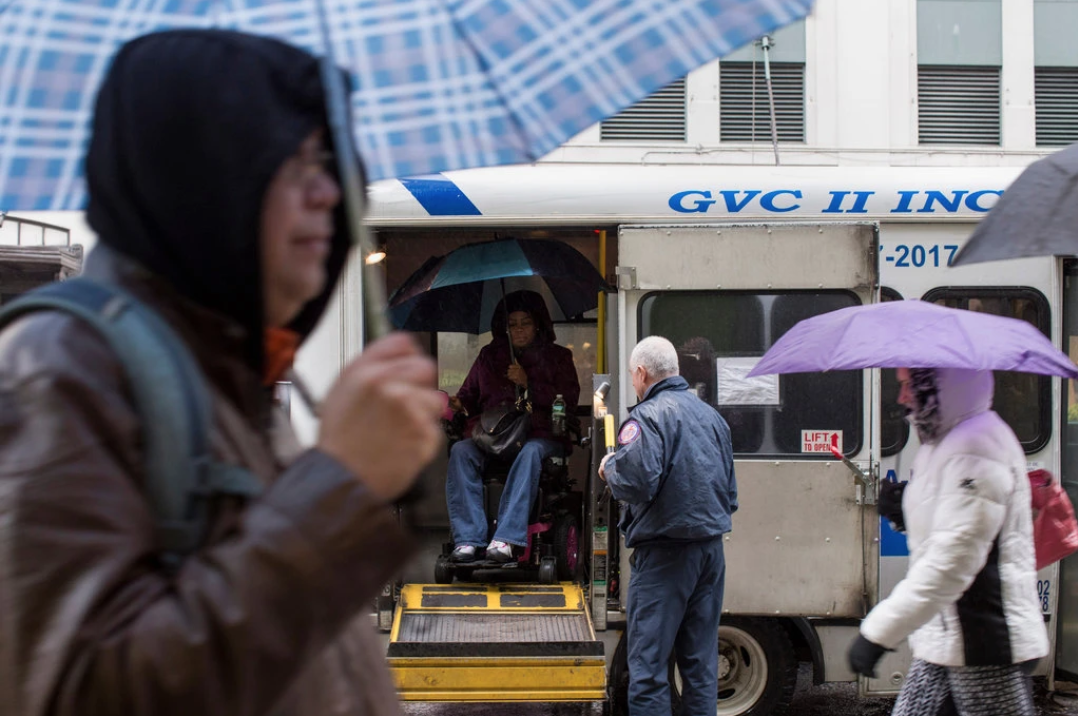 The New York Times ran an in-depth feature this morning on efforts to reform the Access-A-Ride service, quoting our ally in the Access-A-Ride-Reform-Group, Joseph G. Rappaport, the executive director of the Brooklyn Center for Independence of the Disabled.

The story focused on Jessica Champagnie (pictured in the New York Times story, above), a student at the Silberman School of Social Work at Hunter College. Jessica has been interning at NYLPI for the last few months as part of her studies.

NYLPI’s work in this area alongside CIDNY, Mobilization for Justice and BCID is funded by New York Community Trust, which acknowledged the story in a Tweet this morning.

Through its consistent advocacy over the past three years #AARG! has achieved great progress for New York City’s 150,000 Access-A-Ride users. The New York Community Trust is proud to be a partner in this work. https://t.co/CBexCMSvds @NYLPI @CID_NY @BrooklynBCID pic.twitter.com/lIV5UjVkDf

The full story is on the New York Times website, and the text is included below.

Just Like the Subway, Public Transit for New York’s Disabled Riders Is Maddening

The Metropolitan Transportation Authority operates a subway system in New York City that is a study in chronic unreliability and a bus system that often seems to run in slow motion.

It also oversees another transportation service that gets far less attention. Its frustrated passengers say it is no more dependable, even though it makes only a fraction of the trips — almost 7.1 million in 2018 — the subways and buses make. That is about 30,000 a day on weekdays, more than the daily total of all passengers on public transportation in Cincinnati, Tucson or Madison, Wis.

The service is called Access-A-Ride. Most users have disabilities that almost require them to use the service in order to get to work or get to doctor appointments, or just to go out with friends.

Passengers who use Access-A-Ride and advocates for disabled people, who have long complained of poor service, say that recent changes have made things worse. Some riders say they can no longer count on on-time pickups and must ask to be picked up at least an hour earlier than necessary.

“What the M.T.A. seems to be saying is, people who ride Access-A-Ride, they don’t need to be anyplace on time,” said Joseph G. Rappaport, the executive director of the Brooklyn Center for Independence of the Disabled. “This has made their ability to get around the city harder, much less predictable and much more frustrating.”

And, in an era when smartphone apps can be used to hail taxis, Ubers or Lyfts in minutes, most Access-A-Ride users make reservations at least one day before they want to be picked up.

“It feels like separate but equal transportation,” said Valerie Piro, a graduate student who has used a wheelchair since 2008. “The subway system or the buses, if they ran the way paratransit runs, every New Yorker would be absolutely furious. But we’re stuck with this.”

In a tacit acknowledgment of how unreliable Access-A-Ride had become, the transit agency unveiled two pilot programs in 2017 that, confusingly, used the term “e-hail,” which sounded as if they were app-based.

The other program, known as “advanced reservation e-hail,” still relies on the phone to schedule rides, though they can also be done on two apps set up by the transit agency. It also uses an app-like system — for drivers. The first to respond gets to make the pickup.

In March, transit officials announced that the e-hail on demand program, originally scheduled to end on April 30, would continue through the end of the year, but would not be expanded beyond 1,200 users.

At the same time, the agency replaced the advanced reservation e-hail program with a service that riders say has resulted in longer wait times.

“What the M.T.A. seems to be saying is, people who ride Access-A-Ride, they don’t need to be anyplace on time,” said Joseph G. Rappaport, the executive director of the Brooklyn Center for Independence of the Disabled. “This has made their ability to get around the city harder, much less predictable and much more frustrating.”

The two e-hail programs are a sign of what the transit agency wants service for disabled people to become: a predominantly car-based operation that is far less reliant on dedicated Access-A-Ride vans. The majority of Access-A-Ride trips would be handled by yellow cabs, green taxis or private car services.

Transit officials said the two programs were largely responsible for a 16 percent increase in Access-A-Ride trips in 2018 from the previous year.

But the programs were also behind a 13 percent jump in Access-A-Ride’s expenses last year — “a significant and unanticipated increase,” according to Andy Byford, the head of the subway and buses who is also responsible for Access-A-Ride.

For the transit agency, one of the benefits of e-hail on demand was that a taxi trip would cost the agency about $35, about half the cost of a trip in an Access-A-Ride van. The savings would come from the agency not having to buy the taxis for the e-hail programs, as it does with traditional Access-A-Ride vans.

But it turned out that the e-hail programs did not just shift trips to taxis from Access-a-Ride vans and car-service vehicles: Users scheduled more trips than ever since they did not have to call ahead to schedule a ride.

New York differs from other major cities in charging Access-A-Ride passengers the same fare as any subway or bus passenger — $2.75 per trip. Most cities charge paratransit users more and tack on additional fees when a disabled person is picked up or dropped off far beyond a subway or bus stop.

In New York, while wheelchair users make up between 25 and 30 percent of Access-A-Ride’s ridership, they take the majority of trips. The other passengers are ambulatory but have disabilities — blindness, for example — that make taking subways or buses difficult, if not impossible.

Mr. Byford has defended Access-A-Ride as “really a success story,” telling an agency board meeting last month that Access-A-Ride’s on-time performance for pickups was 98 percent in February. That was six percentage points above the goal of 92 percent and an improvement from 2015, when the comparable figure was 89.9 percent, and 2017, when it was 91.1 percent.

Thirty minutes is “a huge window of time,” said Nancy Workman, an Access-A-Ride passenger who lives in Park Slope, Brooklyn. “It’s inconvenient. It’s not fair. It’s a particular hardship for people like myself who have trouble walking or standing,” she said.

Even at 98 percent for pickups, Mr. Byford said at the board meeting, there were “still too many instances of vehicles turning up late or dropping off late.”

And the city is moving to help Access-A-Ride pick up the pace, especially in Manhattan. Starting May 30, wheelchair-accessible Access-A-Ride vehicles with four or more passengers can use bus lanes, which are currently off limits.

Other major cities are also facing the challenge of providing accessible public transportation for disabled people, but paratransit is particularly costly in New York, which has more subway stations than any other city in the country as well as a far-reaching bus network. The Americans with Disabilities Act, a 1990 federal law, says that people who cannot ride subways and buses are entitled to go anywhere their local transit system takes able-bodied passengers.

In New York, all city buses now have ramps or lifts for wheelchairs, but only about a quarter of the city’s 472 subway stations are wheelchair accessible, one of the lowest percentages of any major transit system in the world. Last year Mr. Byford promised to put enough elevators in stations by 2025 that no one would be more than two subway stops from an accessible station. But stations that have elevators are often plagued by breakdowns.

For many Access-A-Ride passengers, the recent changes, particularly the end of the advance reservation e-hail program, have been a throwback to when they referred to Access-A-Ride as “stress-a-ride” or “distress-a-ride,” with passengers describing late pickups and long waits on the phone just to schedule a ride.

Lucy McGowan, who lives in Sunnyside, Queens, said she called Access-A-Ride at 7:15 a.m. on a recent Saturday to schedule a trip to a doctor appointment the following Monday. She said she was on hold for 45 minutes before someone came on the line and booked her pickup.

Many passengers also tell of spending time picking up or dropping off other passengers on maddeningly roundabout routes in Access-A-Ride vans.

Jessica Champagnie, a student at the Silberman School of Social Work at Hunter College, said she spent three hours on a recent Access-A-Ride trip home to the Bronx. After picking her up in Manhattan, the van detoured to Queens to pick up another passenger and drop him off. Only then did it head to her address in the Bronx.

“Very rarely do they take me straight home,” said Ms. Champagnie, who uses a wheelchair. “It’s not a private limo service, but I wonder if they think about how long I’m in the vehicle.’’

Update, May 22: NYLPI’s Access-A-Ride Organizer Eman Rimawi was out, along with fellow Access-A-Ride users, at the MTA’s board meetings this week to complain about major changes taking place with Access-A-Ride from early April. 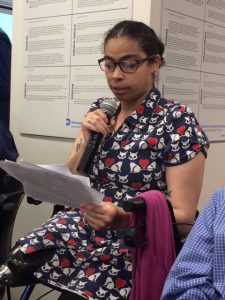 These changes took place without input from the disability community,  and without any explanation for why the changes were going to be made. The changes consisted of the MTA abolishing the advanced e-hail program, which worked very well and cost less than half of what traditional Access-A-Ride cost, per ride. They also created an “enhanced” broker, which has resulted in a return to outrageously long trips, leaving people stranded, unreliability, and lack of flexibility for the service.