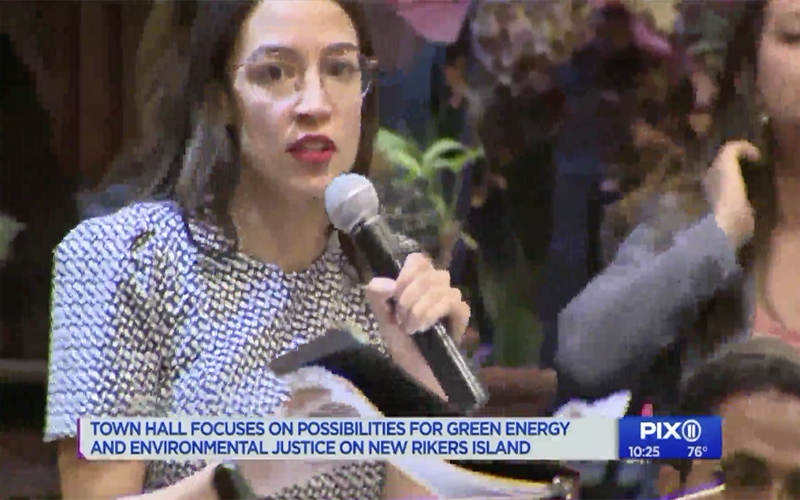 The DeBlasio administration has committed to shutting down the Rikers jails within 10 years. But we’re determined not to make the island into a playground for the rich.

“When we get rid of the stain of the Rikers jail complex, we must replace it with renewable energy and sustainability infrastructure that will benefit our city as a whole, and also relieve environmental burdens from the same communities that have disproportionately suffered from our inhumane criminal justice system,” Rachel said.

Congress Member Alexandria Ocasio-Cortez kicked off the event with an impassioned endorsement.

I’m thrilled so many community members came to our #RenewableRikers town hall, but sadly some folks couldn’t make it in.

So we held an impromptu session on the street.

NY14 is fired up + ready to #CloseRikers, and take it back for the public good ⬇️pic.twitter.com/2cKQ3qnzHL

If you put just 25 per cent of Rikers island and cover it in solar panels, we can close every toxic power plant in New York city that was built in the last two decades.”

That no person should get lead in their water because they couldn’t afford to live in a high-rise apartment.

These are not luxuries, these are rights.

…and highlighted the need to address racial injustice in envisioning a new renewable energy economy. Shortly after her tweet, #RenewableRikers and #CloseRikers began trending online:

This Riker is on board too pic.twitter.com/OLeKfHGrnp

“Riker” memes aside, a solar array on Rikers could displace aging, highly polluting fossil-fuel power plants in the South Bronx, Sunset Park and Western Queens, in addition to other infrastructure possibilities discussed include a new wastewater treatment plant, composting and anaerobic digestion, and even a marijuana farm that could be owned by people who had served time at Rikers on small-scale drug charges. This infrastructure could support new, well-paying jobs for people previously involved with the criminal justice system.

Constructive discussion by our amazing panel on how NYC can create a Renewable Rikers that benefits Western Queens.

Thanks to our co-sponsors and amazing experts for starting this conversation. pic.twitter.com/zqardrjOqn

Rachel is third from right, above. Also on the panel were Cecil Corbin-Mark, Deputy Director of WE ACT for Environmental Justice, Marco Barrios of JustLeadership USA, and Maritza Silva-Farrell, Executive Director of ALIGN. Rebecca Bratspeis of CUNY School of Law moderated. Other co-sponsors of the panel were Council Member Danny Dromm, Assembly Member Catalina Cruz, and State Senator Jessica Ramos. Council Member Helen Rosenthal and Stanley Richards of the Board of Corrections and Fortune Society also spoke.

The event was covered by Pix II, and by various other media outlets around the world including The Independent.