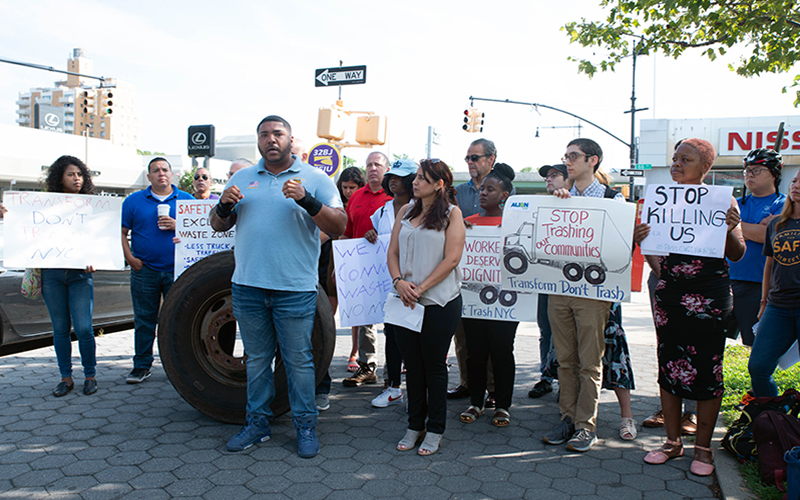 A year after a wheel flew off a private sanitation truck and killed a driver in Bay Ridge, Brooklyn, elected officials, safe streets activists, workers, labor unions, and the Transform Don’t Trash NYC coalition criticized the company’s continued unsafe operation and called for an overhaul of the industry.

The group stood on a street corner in front of a truck tire like the one that flew off a Century Waste truck a year earlier in a horrifying incident, and took a moment of silence to commemorate all the people who have died as a result of lack of safety standards in the commercial waste industry.

We’re taking a moment of silence in Bay Ridge this morning to commemorate all the people who have died as a result of lack of safety standards in the commercial waste industry. We need commercial waste zoning now. pic.twitter.com/9SUT5plNLg

You can download our press release on the action here.

On August 1, 2018, a Century Waste truck was traveling on the Gowanus Expressway when one of the truck’s wheels flew off and collided with an oncoming car. The driver of the car, Robert Martinez of Staten Island, was killed. In the two years prior to the crash, Century Waste had failed two-thirds of its truck safety inspections, including a violation for loose or missing wheel fasteners.

Century Waste is just one example of the many companies with dangerous track records in New York City’s private sanitation industry. Incidents involving private carting trucks have killed over two dozen pedestrians, cyclists, and drivers on city streets since 2010.

The coalition called for the City Council to pass legislation to hold private carters accountable for safety and dramatically cut the amount of private garbage truck traffic in the city. The Commercial Waste Zones bill, sponsored by City Council Sanitation Committee Chair Antonio Reynoso, would assign one carter to each zone of the city, reducing garbage truck traffic by 60%. Carters would be assigned zones through a competitive bid, based on fair prices for small businesses and the company’s labor, environmental, and safety policies.

Since the August 2018 crash, Century Waste has continued to operate, despite investigations that were opened by the Business Integrity Commission (BIC), which regulates private carters, and the Port Authority of New York & New Jersey, which granted a lucrative contract to the company. Over the last year, the company’s violation rates have continued, with inspectors citing Century Waste for numerous problems including bad brakes, improperly secured loads, worn tires, and missing lights, according to records obtained from the Federal Motor Carrier Safety Administration (FMCSA). Nevertheless, no results from the BIC investigation have been announced, and the Port Authority awarded two contracts worth $1,200,540 to Century Waste in March of 2019.

Data from the Business Integrity Commission shows that as of April, only 6 of Century Waste’s 34 garbage trucks were outfitted with side-guards, which can help prevent fatal crashes. This is despite a City program that subsidizes this relatively inexpensive safety measure. In January, Century Waste also paid a settlement of $6,270 to the government for knowingly allowing a driver to operate a commercial vehicle without a license.

The coalition today released a trove of research on Century Waste, which has been posted at TrashKingpinsNYC.org, a website that exposes corruption and wrongdoing in the private carting industry. The dossier outlines Century Waste’s history of union busting, unsafe practices, and role in anti-competitive activity.

Sean Campbell, President of Teamsters Local 813: “Century Waste is the poster child for why we need the Commercial Waste Zones bill. The company is still operating after years of union busting and reckless endangerment of the public. This legislation will ensure that dangerous and corrupt sanitation companies are not allowed on New York City streets.”

Councilmember Justin Brannan: “We are facing an epidemic of traffic deaths this year, especially here in Brooklyn, and this industry is one of the worst actors when it comes to avoidable crashes and fatalities. Like too many companies in New York City’s private commercial trash hauling industry, Century Waste is notorious for a long history of safety violations and reckless practices that put New Yorkers – pedestrians, cyclists, and other drivers – at risk. More than 2 dozen New Yorkers have lost their lives to private sanitation trucks in the past decade, but we now have the opportunity to pass a bill that will make sure more New Yorkers don’t lose their lives. Intro 1574, NYC’s commercial waste industry reform bill, will raise safety standards for the whole industry and the hundreds of trucks that crisscross our city’s streets every day.”

Councilmember Antonio Reynoso: “Robert Martinez’s death serves as a tragic reminder of the danger that private carting companies pose to individuals in our communities and on our streets and sidewalks,” said Council Member Antonio Reynoso. “A year ago today, Mr. Martinez was killed on the Gowanus Expressway when a tire from a Century Waste truck came flying through his windshield. The company’s trucks routinely failed vehicle safety inspections, yet under our current under-regulated system, they were still operating on our streets. This is not the first or last time that the industry’s wild-west practices have resulted in a death, but we can make sure that it’s a thing of the past. It is time to regulate the private sanitation industry through a commercial waste zones system for the safety of New Yorkers, dignity of workers, and health of our environment.”

Alison Hirsh, Vice President at 32BJ SEIU: “One year ago, Roberto Martinez’ death could have been avoided, and it is unacceptable that private sanitation companies that have a history of safety violations are still on the road. 32BJ supports the Transform Don’t Trash coalition’s efforts to reform the system. These efforts will not only save lives and improve pedestrian safety, but protect the environment and lift labor standards for drivers.”

Justin Wood, New York Lawyers for the Public Interest (NYLPI): “One year after causing an horrific death, it is clear that Century Waste and other low-road companies have failed to make basic improvements in equipment and safe operating practices. The fact that these same company owners continue to spend substantial amounts on an anti-reform lobbying campaign speaks volumes about their unwillingness to change. The only viable solution is a strong Commercial Waste Zone system that selects only responsible waste companies to operate in our communities and holds them to high standards.”

Maritza Silva-Farrell, Executive Director at ALIGN: “There’s an epidemic of fatal incidents on our city’s streets. Families are suffering. Today, our thoughts are with the Martinez family and the other families who have lost a loved one in the past decade because of the lack of accountability in the private commercial sanitation industry in NYC. Reforming the private commercial waste industry is a matter of life and death. We need systemic reform of this broken industry so that no more New Yorkers lose their lives or their loved ones to an unmaintained, unsafe, truck operated by a reckless company. The time for the City Council to act and pass Intro 1574 is now, not tomorrow.”

Dr. Tok Oyewole, Policy & Communications Organizer for the New York City Environmental Justice Alliance: “Robert Martinez was struck by a flying wheel from a Century Waste garbage truck, resulting in a very tragic, avoidable, and unacceptable death. Carting companies with over half of their fleet failing to meet basic safety standards should not be allowed to kill people with impunity – not instantaneously as in the death of Martinez, nor slowly from lung-issues exacerbated by diesel engines. The Commercial Waste Zones bill presents a game-changing opportunity to improve street safety for pedestrians, cyclists, sanitation workers, and drivers by ensuring the companies are finally accountable to the city and its residents – while cutting needless vehicle miles traveled nightly under the current inefficient, unjust, and unsafe system.”

Elizabeth Yeampierre, Executive Director, UPROSE: “Today marks the one year anniversary of the untimely yet avoidable death of 64 year-old Robert Martinez. Martinez was killed driving down the Gowanus Expressway in Sunset Park, when a wheel flew off of a Century Waste truck and smashed through his windshield. Commercial waste industry intervention is imperative to save lives, which is one of the many benefits that would come from passing the NYC Commercial Waste Zones bill this year. The bill will ensure safer commercial waste collection practices, which will yield safer traffic conditions in communities so we can all share the road.”