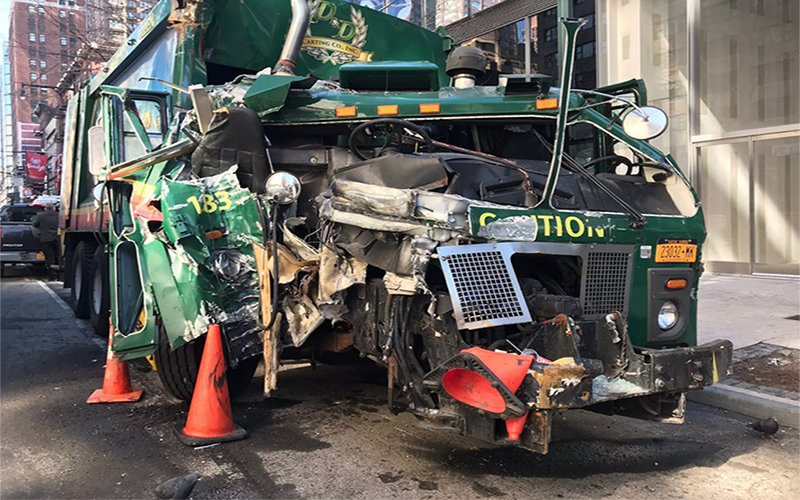 The City Council has quietly released a report critical of an agency tasked with regulating the private waste industry, closing an almost yearlong investigation into a contentious arm of the de Blasio administration.

The inquiry into the Business Integrity Council was one of the first major undertakings of the Council’s Committee on Oversight and Investigation. It was launched amid an outcry over the BIC’s handling of Sanitation Salvage. a private waste company that continued to operate after a driver struck and killed an off-the-books worker with his truck.

The BIC was first formed in 1996 to root out organized crime and corruption in the industry .
Despite the attention the commercial waste industry has drawn since the tragedy, the Council called little attention to the report’s release last Thursday.

Hard copies of the report were first provided to the public at a hearing held by the Council’s Committee on Sanitation and Solid Waste. The hearing was called to collect testimony on seven bills to reform the private waste industry.

Although two of those bills are recommended in the investigation’s findings, the report itself was not discussed at the hearing or listed on the committee’s agenda.

“Not everything has to have a theatrical presentation,” Torres said in an interview. “The goal here is not political theater, the goal here is systemic reform to BIC as an agency.”

But the quiet release is notable considering the amount of criticism levied against t he BIC in the months leading up the investigation’s launch.

The 46-page document raises red flags over the agency’s handling of labor violations, stating the BIC “only sporadically exercised its rulemaking and enforcement authority to hold commercial carters accountable for the unsafe driving practices of their employees .” It states that the BIC’s limited review of property records has allowed bad actors to continue working with the industry , and that the agency has “rarely exercised” its ability to impose civil penalties on carters.

Torres said that the “central finding” of the investigation was that “there was something incomplete” about the BIC’s regulation of “both organized crime and health and safety within the industry.”

It calls for the passage of a bill, Intro 1575, that would require the BIC to impose specific civil financial penalties for certain offenses. It also recommends the passage of Intro 1611, a bill sponsored by Torres. that would expand BIC’s regulatory authority to review applications and renewals for waste transfer stations. Lastly, the report recommends the “careful review” of property records to ensure carters aren’t operating on land owned by individuals banned from working in the commercial waste industry.

Proponents of commercial waste reform said the report was disappointing, and they questioned whether the legislation could adequately address what they see as the BIC’s deficiencies as a regulatory agency.

“They really got the broad view of the Business Integrity Commission, its operations, its responsibilities and how the BIC has been failing to do those responsibilities and meet those responsibilities in recent years,” said Melissa lachan, a senior staff attorney at New York Lawyers for the Public Interest. “It is disappointing to see there weren’t more specific findings that were made public in terms of what has gone so wrong and why lives have been lost due to the malfeasance
of this industry.”

“Is [legislation] really going to improve … an agency [that] has not been able to conduct … its one task of keeping organized crime out ofthe waste industry?” lachan asked.

Torres acknowledged the report falls short of changing the culture at the BIC.

“You can legislate policy, you cannot legislate culture,” Torres said. “And the laws we passed are only as good as the implementation. If the agency refuses to implement it faithfully, then that is a problem.”

He added the BIC has been “too passive” in the past when exercising its existing powers.

“It was slow to take enforcement action against bad actors within the sanitation industry, and has only done so under public pressure under public shaming,” Torres said. “There is a culture of lackadaisical enforcement at BIC.”

The BIC provided brief testimony on the two bills recommended in the report at Thursday’s hearing.
BIC Commissioner Noah Genel said there “may be legal concerns” on Intro 1575, without elaborating on what those would be. On Intro 1611, Gene I voiced support for increased coordination with the sanitation department on transfer station oversight, adding that BIC is currently “conducting a full review ofthe ownership of all transfer stations in the city.”

The de Blasio administration didn’t directly respond to an inquiry on whether the BIC was planning to make any internal changes as a result of the report. “BIC is committed to ensuring businesses in the private carting industry operate with honesty and integrity,” said Laura Feyer, a City Hall spokesperson. “BIC is working to implement the three recommendations.”

The bills recommended in the report were mostly overshadowed by the main focus of the hearing – the city’s push to implement a waste franchising system.

The Council’s plan would divide the city into zones to be served by one carter. The carters would have to meet certain safety, environmental and labor standards to win a contract to serve a zone, giving the Department of Sanitation greater regulatory oversight of the industry.