Reflecting On The Climate Strike, And What New York City Can Do Today

Reflecting On The Climate Strike, And What New York City Can Do Today 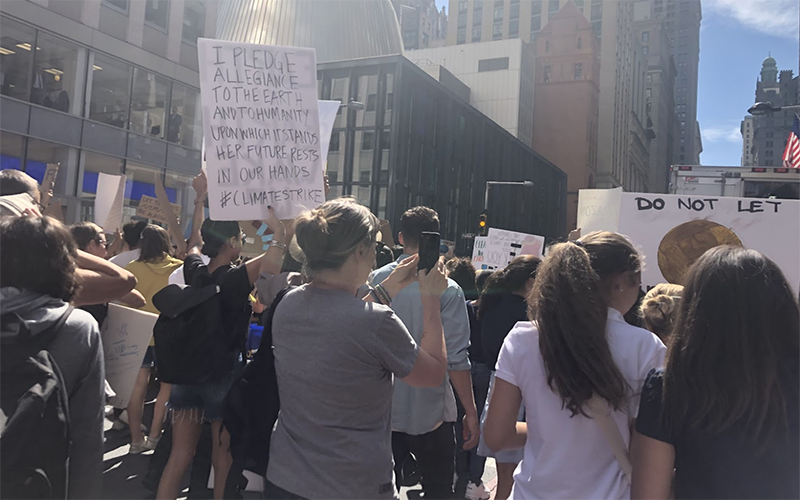 Sarah DeSouza, who has been working as the community organizing intern in the Environmental Justice Program at NYLPI, joined the Climate Strike last week in New York City. Here are her reflections on the day:

On September 20th, 2019, I and 250,000 others marched for climate justice at Global Climate Strike from downtown Foley Square to Battery Park.

Adults were supporting us, but it felt like teenagers and children made up most of the people marching. Students had skipped school, little kids came with their parents and were starting their own chants, as we marched.

Every speaker had been impacted by climate change in a significant way, specifically highlighting the disparities of the effects of climate change in low-income communities and communities of color. The day was opened by a group called the Peace Poets, who spoke on the importance of recognizing land and emphasized that indigenous folks have been doing climate justice work long before it made its way onto the mainstream. The city, the land we were acknowledging as Native land, the centrality of it all, had brought so many of us together.

After passing the Climate Leadership and Community Protection Act (CLCPA) this summer, as well as hosting the third largest global climate strike, New York City has been slowly taking precautions to mitigate the effects of climate change in its communities. However, working as the Community Organizing intern in the Environmental Justice program at NYLPI, has opened my eyes to the ways that NYC government has refused to correct its own local inequities.

By trying to be a world leader fighting against climate change, New York has allowed our local issues to fall to the wayside. For example, school busing in the city disproportionately affects environmental justice communities with bus depots scattered throughout Red Hook, Coney Island, Astoria. Another example, the first Manhattan waste transfer station only came to fruition last year, all other city-owned transfer stations had been located in predominantly low income areas and communities of color.

This past summer while interning for NYLPI, I noted a 95% idling rate amongst school buses in EJ communities like East Harlem and East Flatbush. Bus depots in other boroughs are being routed to serve students attending schools 13 or more miles away, when closer bus depots are at their disposal. The fix to these issues is simple – and while trying to stand up against the federal government and support climate justice is great, it is simply not enough. It is hard to ignore that while Climate Strike may have garnered 250,000 people in support of regulating climate justice, that we still have diesel buses riding through the same streets, taking excessively long routes, polluting our air and exposing students with special needs to increased health risks. We may have passed the CLCPA, but the work doesn’t end there.

Intro 455, a bill currently on the City Council table, would require NYC to transition to an all-electric school bus fleet by 2040. The Council has the votes to pass it, so what are we waiting for? Legislating climate justice cannot be a one and done – if we are to be world leaders on this front, it starts right here at home.