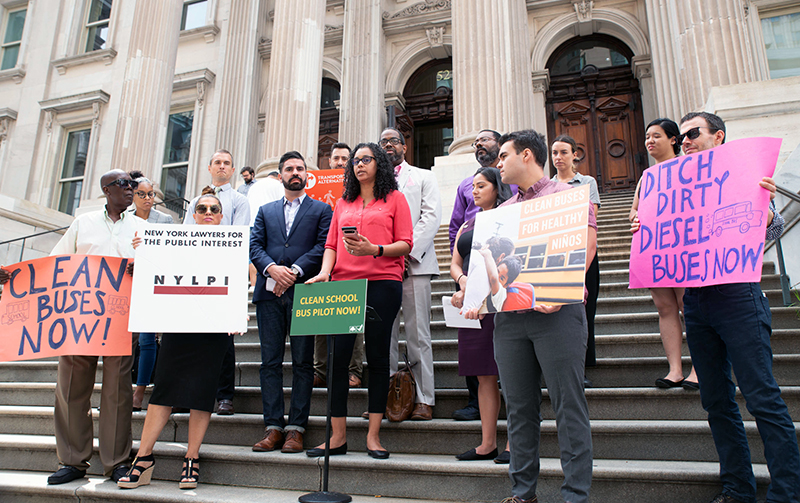 On the first day of school, we joined Council Member Rafael Espinal, the New York League of Conservation Voters and other advocacy groups to call on the NYC Department of Education to clean its school bus fleet—something it committed to doing last year, and to implementing by today.

“This delay by the Department is unacceptable,” said Council Member Espinal, “especially since the funding is in place. I was promised that by this summer we’d have a photo op with a clean bus, and where is it?”

We were also joined by WE ACT, Transportation Alternatives, EarthJustice, Citywide Council for District 75, and other advocates this morning.

The DOE missed a promised deadline in innovating the way it transports students to and from schools. Last year, Council Member Espinal spearheaded a pilot program to bring electric school buses to New York City by the start of this school year. However, the buses are still not on the road.

It’s not easy being green.

Environmental advocates were up in arms Thursday after the city’s Department of Education failed to make good on its commitment to roll out a handful of fully electric yellow buses in time for the school year.

They’re nowhere to be found.

“This is something that should have been an easy ground ball,” said Espinal. “They had the money. They had the support. There’s no reason why they shouldn’t have been able to deliver (the buses).”

Espinal said the DOE has given him no explanation as to why the electric buses are not in place.

DOE spokeswoman Miranda Barbot told the Daily News that the department is still waiting on the contract to purchase the buses to be approved by the office of city Comptroller’s Scott Stringer.

The Comptroller’s office said DOE submitted the contract late and it’s under review.

A report published by the New York League of Conservation Voters last year showed that converting the city’s roughly 9,000 gas-guzzling school buses to electric vehicles would be the environmental equivalent of taking more than 621,000 cars off the road.

“The electric school bus pilot is an opportunity for DOE to be innovative in cleaning up student transport and reduce pollution that puts kids’ health at risk,” NYLCV president Julie Tighe said at a press conference outside Tweed Courthouse Thursday. “Zero emission school buses would provide cleaner air not just for our city’s students, but our communities as well.”

Barbot said the electric buses will hit the streets soon after the contract to purchase them is approved.

“We’re excited about this pilot too, and once the contract is approved we can purchase the buses,” said Barbot. “We expect to have these buses on the road this year.”

Jenny Veloz, Community Organizer at New York Lawyers for the Public Interest (pictured, speaking), said: “It is unacceptable that DOE has delayed the start of this pilot program. Thousands of New York City students will begin the school year riding school buses that put their health at risk. DOE needs to do right by all New York City students and that begins with clean school buses.”

Julie Tighe, President of the New York League of Conservation Voters, said, “It’s the first day of school, and DOE is already late to class. The electric school bus pilot is an opportunity for DOE to be innovative in cleaning up student transport and reduce pollution that put kids’ health at risk. We are disappointed that the pilot’s rollout is delayed and we urge DOE to get on the bus ASAP. Zero emission school buses would provide cleaner air not just for our City’s students, but our communities as well. We urge DOE to begin this pilot and clean our school buses as soon as possible.”

Council Member Rafael Espinal said, “The city and all of its agencies have a responsibility to New Yorkers, especially our students, to follow through on commitments that are made. Today, I stand with advocates in urging DOE to follow through on its commitment to implementing the clean bus pilot program this school year. The program’s delay means more pollution in our environment, more bad air days, and more risks to the health of NYC’s students. We already made the investments, now DOE must continue to work with us in putting clean school buses on our streets.”

“DOE got a failing grade on its promise to deliver clean, electric school buses by its deadline,” said Council Member Costa Constantinides, Chair of the Committee on Environmental Protection. “We expect our students to follow through on their assignments, so we should expect the same of the agency. Students should not ride around in polluting buses, which can contribute to asthma and increase absentee rates. I strongly support Intro. 455-A to drive our school buses into the 21st century. ”

“School buses should ferry children to school and provide drivers with a healthy work environment,” said Cecil Corbin-Mark, Deputy Director and Director of Policy Initiatives at WE ACT for Environmental Justice. “Instead, polluting diesel school buses are taking kids and drivers on the road to poor health. We know that diesel emissions are a trigger for asthma and contribute to the climate crisis. In 2019, we should make the cleaner choice for kids’ health and the climate – an electric school bus.”

Jonathan Smith, Staff Attorney at Earthjustice, said, “School districts across the country are already improving air quality and saving money by switching to electric school buses, but New York City is falling behind. The City says it will do a pilot program to test the technology, but the technology is tried and true. We don’t need a meager pilot program, we need a strong commitment from the City to switch to electric school buses now so that children don’t have to risk their health just to get to school.”

Danny Pearlstein, Policy and Communications Director of Riders Alliance said, “Like children, electric school buses are our future. In a city trying to cut carbon, particulates, and asthma, they simply can’t arrive too soon. The Riders Alliance is proud to join the New York League of Conservation Voters, New York Lawyers for the Public Interest, and Council Member Rafael Espinal to urge Mayor de Blasio and the Department of Education to speed a just transition by piloting electric buses now.”

Thomas DeVito, Director of Advocacy at Transportation Alternatives said, “Each day, New York’s 2,500 schools bus hundreds-of-thousands of kids around New York City. Currently, those buses are a cause of emissions that contributes to climate change, and they fill our streets with carcinogenic and toxic pollution that disproportionately hurt the most vulnerable New Yorkers. Pedestrians and cyclists — and particularly those in lower income neighborhoods — bear the brunt of this exposure everyday. For tens of thousands of us, this can lead to pulmonary problems and other illnesses that are life-altering, and entirely preventable. Electrifying our school bus fleet is an obvious step that the city needs to take as soon as possible. Because just as children have a right to safe passage to school, which is why we pushed for protecting them with speed safety cameras, they also have a right to clean air to breathe.”

In a 2018 report, NYLCV found that pollution from diesel buses poses a threat to children’s health. Due to their developing lungs, children are especially sensitive to the harmful particulate matter contained in diesel emissions. The exhaust and its byproducts have been linked to respiratory diseases like asthma, cardiovascular illnesses, cancer, and higher mortality rates. Over 53,000 students in New York City suffer from asthma and it is a leading cause of school absenteeism.

Diesel pollution is also harmful to the environment. The exhaust contains chemicals, such as nitrogen oxides, that pollute our air. At the national level, school bus fleets can emit 8.4 million metric tons of carbon pollution every year, despite only operating for a few hours a day.

These impacts disproportionately affect vulnerable communities including children with disabilities and children in low-income neighborhoods. According to research by NYLPI, many school bus depots are in environmental justice communities. There are higher rates of hospitalization for respiratory disease among communities near large pollution sources like power plants, airports, and major highways. This means that school buses make thousands of trips in and out of these communities daily.

Students with disabilities are disproportionately impacted by dirty school bus engines, as special education students are more likely to ride buses to school and more likely to travel long distances on a school bus.

Despite anti-idling laws, school buses routinely idle for more than one minute while parked near schools. NYLPI observed 105 buses at 20 different schools in May/June 2019 and found that 95% of these diesel and gasoline buses were idling their engines in apparent violation of local law.

There is a precedent for implementing alternative school bus technologies. Electric school buses have been successfully tested in California, Massachusetts, Minnesota, and Michigan.