The War On Immigrants: Shocking Medical Conditions In Immigration Detention

The War On Immigrants: Shocking Medical Conditions In Immigration Detention 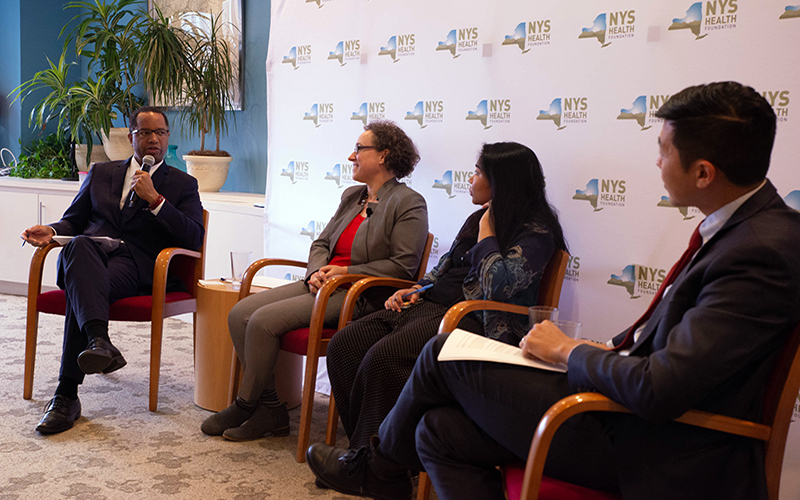 NYLPI’s Medical Providers Network was the focus of a packed-room panel discussion at the New York State Health Foundation today, led by Senior Program Officer Brian Byrd (left, in the image above), featuring (l to r) Laura Redman, Director of Health Justice at NYLPI; Lauren Quijano, Community Organizer at NYLPI; and Dr. Joseph Shin, a physician at Weill Cornell Medicine, and a member of our network:

You can watch video of the whole discussion on Facebook, here. If you’re a medical provider, organizer or attorney interested in getting involved with our medical providers’ network, then please, email Lauren Quijano.

NYLPI’s Medical Providers Network connects migrants in the removal process with doctors who can help advocate for their status to stay in the country, on the premises of malpractice by the healthcare providers in the detention facilities. It’s a multi-prong program that works closely with immigration lawyers and community based healthcare providers. You can find out more about the program here.

The meeting was covered by Crain’s Health Pulse:

The combined efforts of physicians, lawyers and community-based advocates are needed to address the lack of access to medical care for immigrant detainees in the U.S.

There are about 440,000 immigrant detainees across the country, and reports from the U.S. Department of Homeland Security and other entities have raised questions about whether many of these individuals are receiving adequate care for acute, chronic and mental health conditions. In New York, areas of concern have included lack of access to blood pressure medication and pregnancy care, according to the New York State Health Foundation.

“I still think none of us really know the scale or the size of this,” said Dr. Joseph Shin, co-medical director of the Weill Cornell Center for Human Rights, speaking at a panel discussion hosted by New York Lawyers for the Public Interest and the health foundation Thursday.

But, he said, working with community and legal partners can aid in better understanding and addressing the dangerous problem.

Shin said he and other physicians are working with immigration lawyers to gather evidence, such as previous health records, evidence of trauma or untreated conditions in detention facilities, and mental health evaluations.

“Our role is to be able to educate the courts,” he said.

Lauren Quijano, community organizer for the health justice program at the New York Lawyers for the Public Interest, said she is now working with about 60 physicians to address the issue and raise awareness of the conditions in detention facilities.

People in immigration detention face like delays and denials in treatment, failure to provide language access, and failure to tend to acute and chronic illness by being held in detention centers by ICE and private corporations. One immigrant detainee from Venezuela told the room, “I only got to see the doctor once for the three months that I was detained. I was diagnosed with Hemophilia and Hepatitis C and was given no treatment for it.”

Dr. Shin said: “The detainees suffer from illnesses like preventable chronic medical conditions. This care is denied to them and when left untreated, the cases become more severe as opposed to if they were given the proper medical care when they were first diagnosed”. 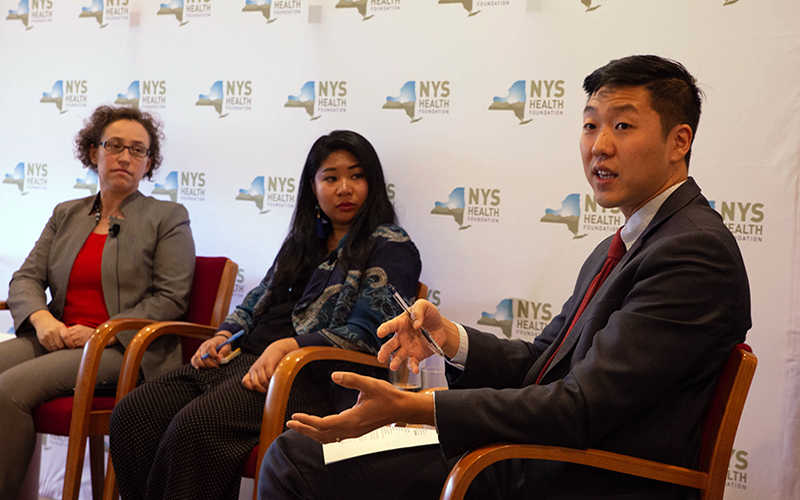 When people in immigration detention are placed in solitary confinement and mental illnesses are left untreated, it can lead to the detainees committing suicide.

Ms. Redman said, “We need to expose these deplorable conditions in these detention facilities. When you take away the ability for an individual to care for themselves, you then garner that responsibility and are held accountable for your actions when you fail to hold up to your responsibility.”

In order to get the community involved and help advocate against the deplorable conditions that detainees face, Ms. Quijano said, “the shock value would have to have some kind of familiarity to get people to get involved. I believe the egregious conditions will shock people, and sadly the shock factor today for getting the community to rally behind a cause is a story like the children dying on the border,”.

Reactions from the audience about the panel were positive.

“I thought the panel was excellent,” said Claudia Calhoon, Senior Director of Immigrant Integration with the New York Immigration Coalition. “What I liked about it was how they described the work they’re doing to address these issues that seem really intractable, and contextualize those in this horrible moment we’re in. And what I really liked about Lauren’s comments was her ability to draw it back to a person’s individual ability to respond to this shocking moment. And that’s one of the things I really love about NYLPI.”

“I’m completely over-shocked already,” says Lauren Quijano, about the lack of apparent “shock factor” amongst New York’s communities who aren’t in #immigration #detention, about the conditions for folks who are. @nys_health that gulf is the result of division in society, she says pic.twitter.com/MCu9oKPrA1

“It takes incredibly brave people to stand up and have their stories told—to hold this country accountable for what is going on.” Laura Redman, @NYLPI #nyshealthevent pic.twitter.com/FgOTVCfAjd

The event was also recapped by the New York State Health Foundation.