Waste Report: New York’s Poorer neighborhoods are getting dumped on

Waste Report: New York’s Poorer neighborhoods are getting dumped on 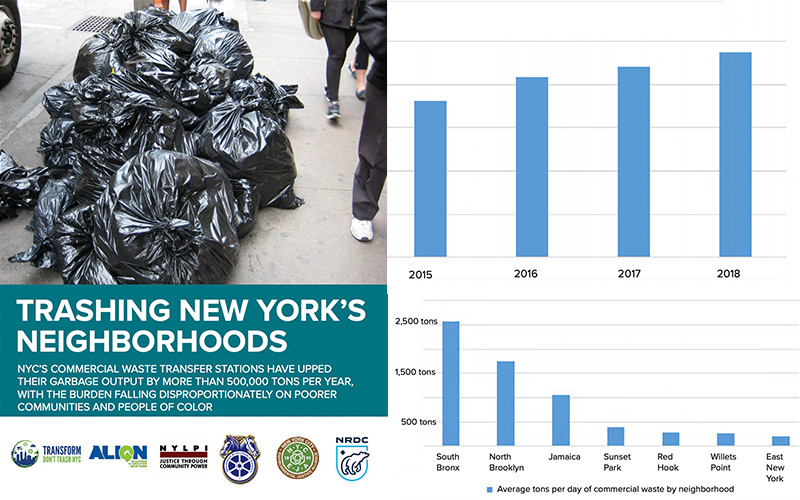 New York City is undermining its major investments in solid waste and recycling infrastructure by allowing the private commercial waste industry to massively increase its reliance on trucking of commercial waste, according to a new report out today by the Transform Don’t Trash NYC coalition, titled “Trashing New York’s Neighborhoods.”

New York’s poorer neighborhoods are getting dumped on.

A report published Tuesday by a collection of advocacy groups found that companies that haul trash for private businesses are dumping more than ever at transfer stations in areas like the South Bronx, northern Brooklyn and southeast Queens.

Councilman Antonio Reynoso (D-Brooklyn) is pushing a bill that would heavily regulate waste haulers in the city.

Justin Wood of New York Lawyers for the Public Interest, who authored the report, said “the city has done everything right” on trash collection, but added that it needs to incentive private haulers to “be better neighbors.”

Wood said one way to make the distribution of trash more equitable would be for the City Council to pass Reynoso’s bill.

“If we can go from a chaotic industry where we have 90 different players to a simplified system where the city can have a lot of leverage where your’e only cutting down to the most responsible players… everybody wins,” said Wood. “They (the private waste haulers) will have to play be the rules or risk losing their contract.”

Southeast Queens sees uptick in trash hauled through its streets, according to report

Southeast Queens has seen an uptick in the amount of trash trucked through its communities by private waste companies, according to a new report from the Transform Don’t Trash NYC coalition.

More than 90 different commercial waste companies haul trash for the 100,000 businesses around the city, such as restaurants and corporations, to waste transfer stations. This system is separate from the public waste system, run by the Department of Sanitation.

DSNY has updated how it collects trash, utilizing barge-and rail-based transfer stations to export 87 percent of residential garbage out of the city, compared to the 13 percent that DSNY exported out of the city in diesel trucks, according to the report.

Meanwhile, private waste companies increased their use of truck-based transfer stations by 35 percent, with 81 percent of all commercial trash hauled through these stations via truck, the report asserts.

The locations where they stations are, however, such as Southeast Queens, the South Bronx and Northern Brooklyn, have left residents complaining about the strong smell, air pollution and road hazards from the increased number of trucks.

DSNY introduced a plan to combat the issues surrounding the private waste sector last year, including a system that would separate the city into 20 zones where only three to five carriers could operate within each zone. This method, according to the DSNY, would cut down on carriers crisscrossing around the city and problems like air pollution.

“A non-exclusive system achieves very similar efficiency and emissions improvements compared to a monopoly system, while avoiding the large disruption to the market and customers that would come with having only one carter per zone,” the spokesperson continued.

Councilmember Antonio Reynoso, who represents parts of Queens and Brooklyn, introduced a bill into the City Council that would require commercial waste zones, but would only allow for one waste carrier per zone, to be vetted by the city government.

“I am proud to introduce legislation to reign in New York City’s private carting industry once and for all,” Reynoso said in a statement when the bill was announced in May. “My bill will authorize the City to enact a commercial waste zone system to comprehensively address the labor, safety, and environmental violations that have plagued the private carting industry for years. A zoned system will make routes drastically more efficient — this means a reduction in vehicle miles traveled, meaning less greenhouse gas emissions and improved pedestrian safety. Furthermore, in order to operate in one of these zones, companies must comply with stringent labor, safety, and environmental standards.”

As the Department of Sanitation (DSNY) has phased out the use of private truck-based transfer stations for residential waste, private haulers have trucked increasing amounts of commercial waste to these facilities, which are disproportionately located in low-income communities and communities of color, the report says.

Councilmember Antonio Reynoso, who introduced the bill, said: “Communities of color, like my district in Williamsburg, have long borne the consequences that come with handling a disproportionate amount of our City’s trash,” said Council member Antonio Reynoso. “Advocates and I have fought tirelessly to instill equity into our City’s waste processing system by limiting the amount of trash handled in overburdened districts and by advocating for export by barge rather than trucks. Data from a recent report by the Transform Don’t Trash Coalition shows that our efforts are being undermined by the private carting industry’s increased reliance on trucking for the export of commercial waste. A commercial waste zone system will finally instill equity into our private sanitation industry while ensuring that the industry abides by environmentally sustainable practices.”

Councilmember Donovan Richards said: “This new data proves that communities of color will continue to carry the burden of sorting more and more commercial waste,” said Council Member Donovan Richards. “The city must move forward with decisive action to create a strong policy that addresses this injustice as soon as possible. Thankfully, the implementation of Waste Equity and the passage of Commerical Waste Zones can accomplish the goals of reducing greenhouse gas emissions and improving the health and safety of environmental justice communities.”

Councilmember Diana Ayala said: “The commercial waste industry continues to burden environmental justice neighborhoods like East Harlem and the South Bronx with their continued reliance on trucks to haul waste. The Coalition’s new report is a reminder of how desperately our city needs commercial waste zones, which will help decrease greenhouse emissions, establish better labor standards, and improve street safety,” said Council Member Diana Ayala, Co-Chair of the Progressive Caucus. “It is clear that Council Member Reynoso’s Commercial Waste Zones bill must be passed soon to achieve these goals and protect our communities.”

Report author Justin Wood from New York Lawyers for the Public Interest said: “These new data confirm the experiences of people living near commercial transfer stations – there are too many trucks, too much noise, and too much pollution.  In addition to the Waste Equity Law, the City needs to use the Commercial Waste Zones plan as a means of reducing commercial waste and redirecting some of it to cleaner, more modern barge and rail-based facilities to reduce the burden on environmental justice communities.”

Dr. Tok Oyewole, New York City Environmental Justice Alliance, said: “Increasing quantities of waste are being sent to facilities in the same few communities of color in NYC. On top of this unfair burden, these private facilities are often in violation of local and federal laws, plaguing communities with persistent smells, leachate, pest problems, idling trucks, as well as diesel truck-fueled air pollution, traffic accidents, street damage, and noise. Passage of a robust Commercial Waste Zones bill will address these injustices and tackle the climate crisis by rewarding better practices in an industry that has been unaccountable for too long. ”

Angela Tovar, THE POINT CDC, said: “In the wake of the climate crisis, it is particularly critical that the City of New York move away from harmful and extractive practices and transition to a new method of commercial waste collection that zones and regulates the system and reduces the millions of vehicles miles traveled by commercial waste haulers every year. We know that a more regulated system will greatly reduce particulate matter and other ground-level pollution. In a community like Hunts Point, which is ranked one of the highest on the NYC climate vulnerability index, and a community that hosts the second-largest concentration of the waste transfer stations, this is a matter of life and death. We are calling on our leaders, The Department of Sanitation, and The Mayor to take action now.”

Jen Chantrtanapichate, Founder of Cleanup North Brooklyn, said: “A comprehensive commercial waste zone system is absolutely critical for New York City to reduce severe environmental impacts that contribute to the climate crisis and to provide much-needed relief for our environmental justice communities. Living in North Brooklyn for over a decade, I’ve witnessed firsthand how private carters pollute our air and how inequitable and unsustainable the current waste system is. From my understanding, commercial waste zones have the potential to cut truck miles driven by 58% citywide. This is essential if we are working to justly transition our city towards climate emission goals.”

Sean T. Campbell, President of Teamsters Local 813 said: “Black and Brown communities where my members live were promised relief from pollution, dangerous traffic, and fumes when the Department of Sanitation built marine transfer stations and stopped relying on private transfer stations. That promise has been broken, as private carters have sent more and more commercial trash to these communities in recent years. We need a strong commercial waste zone bill to protect environmental justice communities from having to continue dealing with the impacts of everyone else’s trash.”

Maritza Silva-Farrell, Executive Director, ALIGN, said: “This report shows that the amount of commercial trash being processed at private waste transfer stations in the city has shot up, and neighborhoods in North Brooklyn, the South Bronx, and Southeast Queens that are already living with the worst environmental pollution in the city are continuing to bear the burden. Environmental justice communities in these areas were supposed to see some relief with marine transfer stations, but unregulated private carting companies continue to dump in our backyards. The city has to step up and take responsibility for the millions of tons of trash that businesses in New York City are producing every year. We must build a sustainable, just system for our climate future by passing intro 1574.”