“When young people come into my office, I reprioritize to make sure I’m paying attention to them.”

“When young people come into my office, I reprioritize to make sure I’m paying attention to them.” 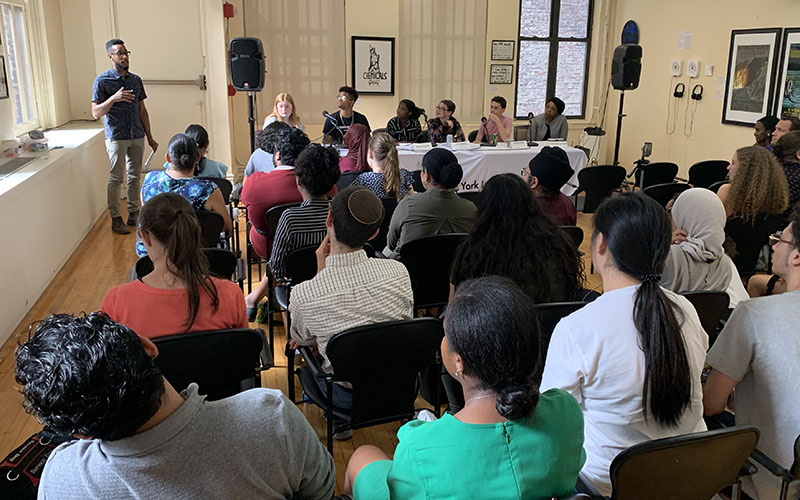 Young people from all over New York came together inside NYLPI’s pop-up social justice museum this afternoon to focus on the power of youth activism and organizing.

New York City Council Member Antonio Reynoso delivered some remarks, focused on the value of young people in changing the world. “Young people here are rewriting the department of education’s policies,” he said. “It’s just an example to think about, 15, 16, 17 year olds are writing policy for some of the largest government organizations in the world. The first rally after the Department of Justice decided they didn’t want to prosecute in the Eric Garner case was led by young people. It’s just an example of youth-led work that really sets the tone for the conversations we should be having now, not just in the future.”

He said it’s important that young people are at the front line in making the policy. “The people in the struggle making the policy,” he said. “I really feel like youth activism is getting going, now. Especially the young women. Really think about it, going into politics. There’s not anything we’re doing right now where young people can not be of influence. When young people come into my office, I reprioritize to make sure I’m paying attention to them.”

“I think we have issues with our education policy in the City of New York,” he said. “It’s a bunch of older people trying to dictate what it should look like, but that’s a place where young people can really make a difference.”

The panel discussion was moderated by Lucy Ivey, Founder and Host of the Teens Speak Up Podcast. The panel covered the gamut of social justice issues from school shootings to mental health, addiction, school integration, the climate crisis, and more. They talked about how they got into activism, and what inspires them now.

“Destigmatizing mental health discussions amongst young people is so important,” said Toddossa Coleman, with Youth Advocacy Corps. “A lot of people don’t feel comfortable having these conversations, no matter what their age. Let alone young people.”

Toddossa talked about the stigmatization of mental health issues in different communities. “A lot of people have gone through trauma but they don’t even know what it is because they think it’s normal,” she said.

“Being that we’re young and we’re smart, and we’re cool like that, we thought of 65 years since Brown v Board of Education, and said it was time to retire segregation in New York City”, said Obrian Rosario, a Director of IntegrateNYC, which has been part of efforts to racially integrate New York schools. He’s also been part of the Fair Play Coalition, which has worked with NYLPI on school integration through our sports equity campaign.  “We threw a party in Times Square. It was really cool to see how we blended activism and youth.”

“There’s a lot of people in government who know that the climate crisis is a real thing,” said Spencer Berg, a co-organizer and group leader with Fridays for Future NYC, a climate justice organization. “But due to the fact that there’s lobbying and corruption, that’s what I call it, I’d really tell them to realize, please, start making change, and stop it with these lobbyists, because they’re going to hold us down and stop us having a really good and quality future, so please work on that.”

“Don’t limit yourself to what you’re learning in school,” said Sarah De Souza, an environmental justice organizing intern with New York Lawyers for the Public Interest, and organizer for Brooklyn Heights March for our Lives Walkout. “A lot of the time what you’re learning in the classroom is important for your life. But find something you’re passionate about, that you’re passionate about, and pursue it. Don’t hold back because of your age.”

“I came into this because my family member had cancer,” said Ava Monroe, Executive Director of The Cure Campaign, an initiative to pass federal legislation increasing the National Cancer Research Budget, while supporting youth advocacy. “It was a very personal journey. But I think all activism should be intersectional. With the work I’ve done, supporting youth advocacy is key to beginning a revolution. If we look at the revolutions in history, all were started by young, smart, passionate kids. All of them.”